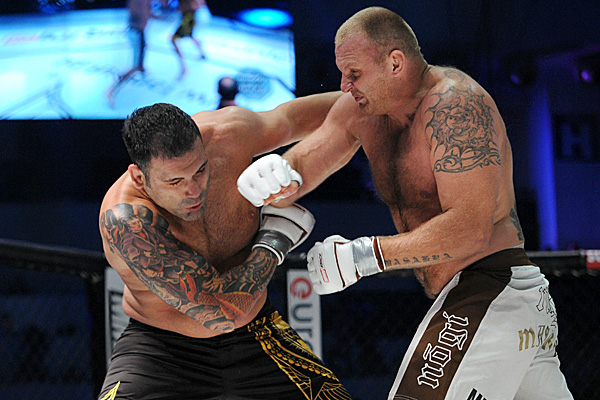 The Zabrze-born fighter kept kicking Rodriguez in the thighs and punished him with uppercuts every time he tried a single-leg takedown. When the American realized he wouldn't be able to take the fight to the floor, he began flopping to his back and inviting Kita to grapple with him. The Pole did not answer the taunts and each time let referee Grzegorz Jakubowski stand the fight up. Much to the dismay of the crowd, Rodriguez offered even less offense in the second frame. The Polish fighter continued his patient, striking-oriented attack and cruised to the final bell. 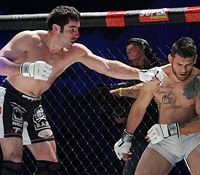 In a fairly uneventful first round Krakow-based fighter landed single punches and easily defended all Padilla's takedown attempts. Both fighters entered the second stanza visibly tired and decided to throw hands. Drwal mocked and taunted his foe, bringing his hands down and eating punches on purpose. Padilla answered his invitation to trade strikes and three minutes into the frame the fight turned into a sloppy slugfest.

The Pole landed heavier blows and repeatedly hurt the American with vicious hooks in the final seconds of the bout, but wasn't able to finish him. After 10 minutes, all three judges awarded Drwal the unanimous victory.

“I wanted to irritate him and lure him into a striking battle, I guess it worked,” Drwal joked after the fight, explaining his taunting tactics. 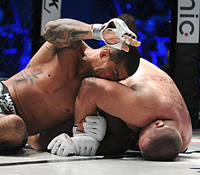 “The Polish Pitbull” had no respect for his opponent's grappling prowess as he attacked him with a takedown from the start of the first frame. After briefly gaining Ferreira's back, Grabowski sacrificed the position and went for an armbar, but “Mamute” defended the submission attempt and moved to side mount. Both fighters returned to their feet after Grabowski's reversal and this time, the Brazilian shoot for a takedown. The Opole native grabbed his neck and jumped to an arm-in guillotine which Ferreira had to
tap out to at 2:57 of the first round.

“I was ready for 15-minute fight,” said Grabowski after the bout. “I'm very glad I was able to submit a Brazilian jiu jitsu black belt as I haven't earned this prestigious rank yet.” 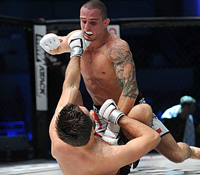 The former freestyle wrestler from Poland scored his first takedown two minutes into the bout, however he was quickly countered with a heel hook-to-kneebar combo executed by the 24-year-old from Balingen. Mankowski grimaced in pain, but refused to submit and finally escaped the hold and pulled guard.


The second round was more even. Sobotta gave up another takedown, but he quickly returned to his feet and took down Mankowski twice himself. The round ended with the German fighter working for another kneebar. After two five-minute round, two of the three judges scored the fight a draw and ordered an extra round. After Sobotta's reversal, Mankowski spent the most of the frame on his back. He remained active from his guard threatening his opponent with an armbar and landing a solid upkick. Once again verdict, was not unanimous as two judges saw the round and the fight for the Pole and the third one scored it for Sobotta.

In a close lightweight scrap, Costa Ricam native Juan Barrantes upset former KSW contender Maciej Gorski, earning a split decision after an extra round. The Renzo Gracie understudy scored takedowns with ease, but had to fend off a deep armbar from the Konin-born fighter in the second stanza. After a two-round draw, Barrantes convinced the judges with another three takedowns in the extra round, giving him the nod on two judges' scorecards.

French featherweight Johnny Frachey earned a puzzling split decision over Ankos Zapasy Poznan's Sebastian Grabarek. Frachey started the two-round fight by knocking his Polish foe down with a precise head kick and later controlled the action in the cage with submission attempts and superior stand-up skills. The sole judge's scorecard for Grabarek was undeserved, as he clearly lost both rounds.

In the opening 161-pound catch-weight bout, Okninski MMA Bialystok product Piotr Niedzielko made a quick work of the previously undefeated karate stylist Maciej Sikonski, forcing him to tap to strikes from the back mount in 59 seconds.