ATLANTIC CITY, N.J. -- Gian Villante captured the vacant Ring of Combat light heavyweight title in 63 seconds with a brutal ground-and-pound victory over Joseph Reyes at the Tropicana Hotel and Casino on Friday night.

Villante was just too much for Reyes at ROC 33, as he was not able to get off a single offensive move. This is Villante’s second title; he clinched the ROC heavyweight crown earlier this year.

In the co-main event, promotional middleweight ace Chris Weidman showed off his hands while successfully defending his title against a game opponent in Valdir Arraujo. A recipe of strikes, smothering takedowns and ground-and-pound was enough to keep Arraujo off balance for most of the fight. 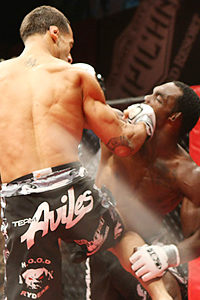 K. Mills
Aviles stopped Sheppard.
Joseph Aviles kept his winning streak alive with a stunning right hand knockout of late replacement fighter George Sheppard to capture the ROC lightweight title at the 4:21 mark of round one.

Reminiscent of K.J. Noons’ knockout loss to Charles “Krazy Horse” Bennett, Aviles was hit with a right hand that sent him staggering back while Sheppard hit the deck.

Although Sheppard was completely knocked out, Aviles landed two more blows for good measure, catapulting himself into discussion as one of the East Coasts’ top prospects.

Nova Uniao standout Marcos Galvao dominated from bell-to-bell against Ryan Vaccaro to claim the promotion’s featherweight title. Galvao used a mixture of knees and a smothering ground game to keep Vaccaro uncomfortable throughout the fight. All three judges scored each round for Galvao.

In other title action, Sean Santella submitted Mikey Lovato to take the vacant 125-pound title. After a first period of mostly grappling, each fighter had their chances and appeared to be equal on the mat. However, Lovato was playing right into the AMA Fight Club product’s game and Santella secured an armbar victory at 2:56 of round two.