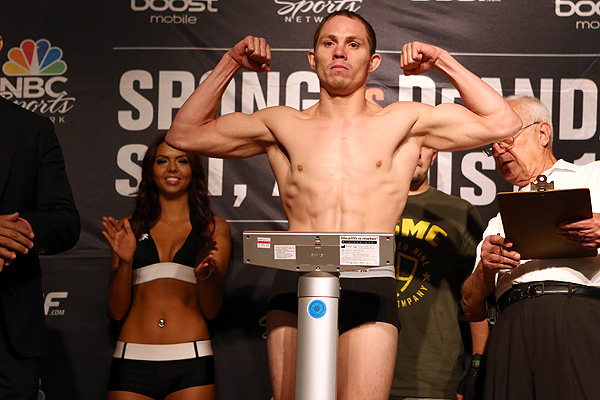 Lewis Gonzalez stayed undefeated Aug. 10 when he earned a unanimous technical decision over Antonio McKee at World Series of Fighting 4.

The bout ended prematurely in the third round when Gonzalez accidently struck his opponent with an illegal elbow. McKee was unable to continue, which sent the fight to the judges, who crowned Gonzalez the victor.

Days after the fight, Gonzalez joined the Sherdog Radio Network’s “Beatdown” show to break down the bout, discuss his future and more.

On the elbow that stopped the fight: “In the third round he was just covering up in guard and I was dropping my blows on him and then I don’t know. It just felt like I went to throw the elbow and he kind of … he turned his head away, but yeah, right when I hit him in the back of the head, I even under my breath said a curse word and I think the ref saw that and he stopped it. He knew I messed up on that one. They weren’t intentional. Sometimes in the heat of the moment, you don’t know which way your opponent’s going to react and which way he’s going to turn.”

On McKee’s choke attempt: “There was one time where it was pretty close, but I just kept my chin down, kept hand fighting. … I’ve been in that position millions of times. I kept calm.”

On his own D’Arce attempt: “There was a couple of times where I had it trapped on him for a good 30 seconds, for a minute and he just wasn’t tapping. I was like, ‘Dude, I don’t know what’s going on. I’ve got my forearm right across his jugular and I’m pressuring him. I’m pushing my knee on his head to apply a little bit more pressure.’ Yeah, I was surprised he didn’t tap on that one. That whole second period I think I just wore him down.”

On McKee tiring: “I turned around and he was just sitting there on his hands and knees with his head down on the ground. His cornerman had to come and carry him back. Right then and there I smelled blood. I was feeling a little tired too, but once you see your opponent beat like that, it just gives you so much energy because you know you’re so close.”

On how the fight would have played out if it had continued: “Everyone that was there and saw it live or just got to watch it could see that I had him beat already [between] the second and third rounds. … He pulled guard, and when does Antonio ever pull guard? I think he was beat. I don’t think he was looking for a way out, but I think he was trying to look for some time to recover because he was so burnt and tired from me imposing my will on him.”

Listen to the full interview (beginning at 54:50).