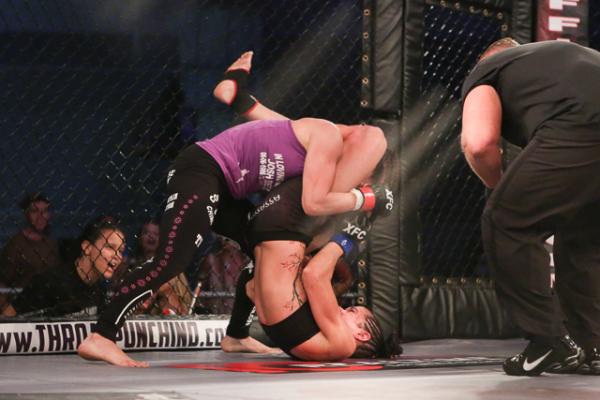 The 5-foot-8 Eggink utilized her height and reach advantage, keeping the 5-foot-4 Magana at bay with jabs and push kicks for much of the first round, though Magana was able to step in the pocket and drill Eggink with several hook combinations to keep it competitive. 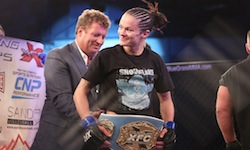 W. Fox
Eggink struck gold in 'Duke City.'
The second round saw Magana step up the aggression, scoring two takedowns, landing in Eggink’s guard and working in short hooks to the body. However, “Snowflake” cleverly worked her way up to the cage, pulling her guard high and trapping one of Magana’s arms inside of a triangle choke. Magana was forced to tap at 3:10 of the second round.

The 25-year-old Floridian is now 4-1 in her young career, while the well-traveled Magana drops to 11-6.

The fighters matched one another tit-for-tat, with Rainey having early standing success and Lima controlling him on the ground late in the second. With both fighters fatigued in the third, Rainey landed a series of punches and scored a late takedown before the horn, but to no avail on the judges' scorecards.

“I felt a little slow, not happy with my performance, but happy with the win,” the 24-year-old Lima commented after the bout. He moves to 9-1 with the victory, while Rainey falls to 6-2, having his three-fight winning streak snapped.

Farkhad Sharipov earned a crack at the XFC featherweight title, stopping Stephen Bass at 4:19 of the second round. The Gracie Barra Orlando fighter dominated from top position in the first round, but found his range in the second, dropping his man with a right hook, taking full mount and punishing the Louisiana native until referee Robert Romero intervened. 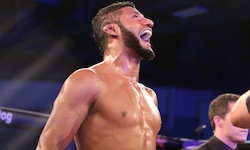 W. Fox
Lima was relieved to get the nod.
UFC and Bellator MMA veteran Ryan Thomas revisited his June stoppage of Rocky France by stopping him for the second occasion, this time via submission. Thomas dominated the first round, with one of his elbows opening a cut on France's forehead that warranted a doctor check. In the second, Thomas jumped a triangle choke off of a lazy France single-leg attempt, tightening up the choke and an armbar on the ground and ending the 175-pound catch-weight contest 87 seconds into the second round.

Jackson-Winkeljohn lightweight Landon Vannata defeated American Top Team fighter J.P. Reese via split decision (30-27, 29-28, 28-29) in a back-and-forth brawl. The more experienced Reese attacked with his jab and relentless takedown attempts, taking the back in first and second rounds. Vannata, however, landed the heavy shots on the feet and thwarted the majority of the ATT product's wrestling to earn the nod.

Flyweight Joby Sanchez won his fifth straight bout, topping Alliance MMA’s Eric Moell. After Sanchez punished Moell for failed takedowns, Moell finally got his man to the mat. However, Sanchez popped right up, and two consecutive right hooks dropped Moell to the canvas. Sanchez swarmed down, throwing hammerfists and elbows Moell’s head until Gary Copeland stopped the fight at 3:25 of the first round.

Santa Fe 135-pounder Joshua Montoya defeated Ed Tomaselli, reversing an early takedown from his foe and delivering elbows and punches on top. Though referee Robert Romero attempted to stand them up after a brief moment of inactivity, Tomaselli was unable to continue and the fight was waved off at 1:47 of the first round.

Demolition Fight Team's Jordan Espinosa defeated Tim Sosa quickly in a flyweight affair, taking him down and deftly moving to a fight-ending north-south choke at just 96 seconds of the first round.