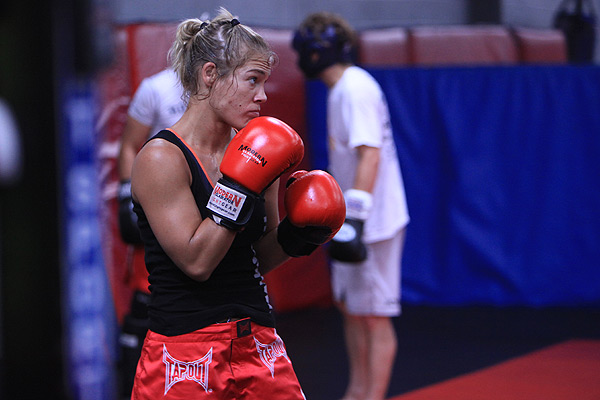 Julie Kedzie was on the verge of pulling the upset against one of the most popular fighters in women’s mixed martial arts today. Then Miesha Tate grabbed an arm. The Jackson’s MMA product held on for as long as she could but was ultimately forced to tap to Tate’s armbar at 3:28 of the bout’s third round. For her efforts, Kedzie could be out for as long as six months with a potential left rotator cuff injury.

Sherdog.com learned via email from the California State Athletic Commission that Kedzie was one of eight fighters from Saturday’s Strikeforce “Tate vs. Rousey” card to receive a medical suspension. The event, which took place at the Valley View Casino Center in San Diego, was headlined by Ronda Rousey’s first successful title defense against Sarah Kaufman. The Showtime broadcast also featured the return of former middleweight king Ronaldo Souza, who knocked out Derek Brunson in 41 seconds.

Light heavyweight Ovince St. Preux could also be out for up to six months after suffering a thumb injury in his third-round knockout victory over T.J. Cook. The former linebacker at the University of Tennessee knocked his opponent cold with a left hook in round three of their 205-pound tilt. Meanwhile, Cook was suspended indefinitely for a possible neck fracture.

Additionally, middleweight Keith Berry received an indefinite suspension pending doctor clearance for a hyper extended left knee suffered in his loss to Adlan Amagov. Amagov appeared to hurt Berry’s knee with a kick early in their encounter before swarming with punches to finish the bout 48 seconds into the opening stanza.

Derek Brunson: Suspended 45 days (no contact for 30 days) for knockout

Lumumba Sayers: Suspended 60 days (no contact for 60 days) for cuts on right eye and left scalp

T.J. Cook: Suspended 45 days (no contact for 30 days) for knockout and indefinitely or until cleared by doctor for possible neck fracture

Julie Kedzie: Suspended 180 days (no contact for 180 days) or until cleared by doctor for possible left shoulder rotator cuff injury.

Keith Berry: Suspended 45 days (no contact for 30 days) for TKO and indefinitely or until cleared by doctor for hyper extension to left knee.

Hiroko Yamanaka: Suspended for 60 days (no contact for 60 days) for cut to right interior eye.