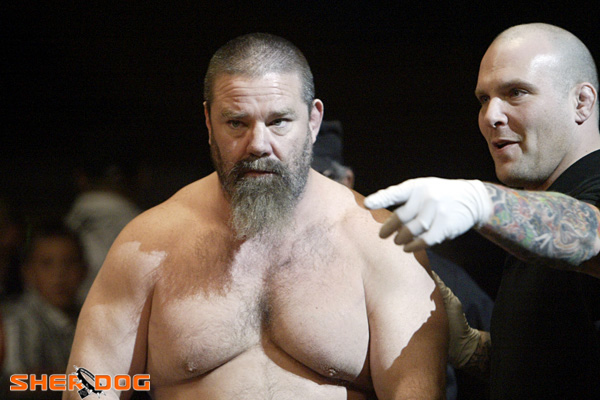 The first work in the trilogy, “Bar Brawler,” is available now on Amazon.com as a paperback and as a Kindle download. It tells the story of Walter Foxx, a fictional character described as “Happening Beach, California’s most feared bar brawler.”

To fight fans, Foxx may sound a lot like Abbott himself. The character’s adventures may also echo many of Abbott’s.

“It’s up for you to figure out if it’s true or not, but if I was a betting man, it’s pretty close to being true,” Abbott told the Sherdog Radio Network’s “Beatdown” show. “But I made things up and made people up and everything else, so it’s just a novel and people can make what they want of it.”

Abbott did acknowledge that he had plenty of real-life material to work from as a writer. He estimated that before debuting in the UFC with a violent knockout of John Matua in July 1995, he’d already had some 200 street fights.

“I can draw on some things and put them into stories, so to speak,” Abbott said.

Of course, an autobiography may have also been interesting, but Abbott said he didn’t think such a work on his life would have been “legally possible.” Instead, he turned to fiction.

“I made sure I had a couple of drinks in me before I’d start taking pen to paper,” Abbott said.

He wrote in spiral notebooks, filling 12 to 13 of them over the course of several years. The second installment, “Street Warrior,” is expected to be released in January. “Cage Fighter” will conclude the trilogy, which is being published by Full Circle Press.

“There could be 10,000 pages of fights if I was going on my memory, but … every fight in the book has a purpose and a meaning and it’s written very metaphorically,” Abbott said. “Everything has a purpose. It’s not just like a biography where someone says, ‘Oh, I was wrestling in high school and then I went to college and I dropped out because my girlfriend wouldn’t write papers anymore,’ that kind of stuff. … It’s not one of those things. It’s kind of like ‘Old Man and the Sea.’ It’s about finding your meaning in life and being lucky enough to live it.”