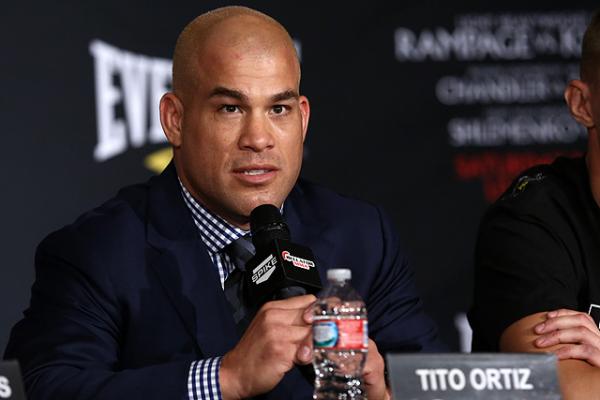 Tito Ortiz does not expect “a sportsmanship-like fight” on Saturday. | Photo: Dave Mandel/Sherdog.com


At first glance, feuding Bellator 131 headliners Tito Ortiz and Stephan Bonnar would appear to have some things in common.

Both are UFC Hall of Famers; both played a vital role in elevating mixed martial arts to its current level; and both know a little bit about selling a fight. Kindred spirits? Not so fast, says Ortiz, who believes Bonnar rode Forrest Griffin’s coattails to prominence and has done little of note since their groundbreaking bout at “The Ultimate Fighter 1” finale on April 9, 2005.

“Yeah, it was a great fight. Don’t get me wrong -- I was there,” Ortiz told Sherdog.com. “But what about all the other great fights that fans watched in my whole career? To get inducted into the Hall of Fame after losing a match and not even being a champion? That doesn’t make sense to me.

Ortiz has long been one of the sport’s most recognizable figures, a former UFC light heavyweight champion whose beef with Dana White became the stuff of legend. Though his late-career struggles made him something of a punch line near the end of his tenure with the Las Vegas-based promotion, Ortiz was one of its first true name-brand stars. Bouts against the likes of Ken Shamrock, Vitor Belfort, Randy Couture and Chuck Liddell stand out as remnants of the UFC’s storied past. While Griffin-Bonnar might have been the final breakthrough as MMA entered an unofficial golden age, Ortiz had already been laying the foundation for success.

Ortiz fought Griffin three times in Octagon before temporarily retiring following the conclusion of their trilogy at UFC 148. Bonnar, meanwhile, somehow never showed up on the radar of the “Huntington Beach Bad Boy.”

“I didn’t even know the guy at all. I knew him as being a reality star, a guy on reality TV,” Ortiz said. “That was it. Forrest did everything great in the UFC. He was a great fighter; he was a world champion; he competed at a great level. Bonnar was the guy at his waist. I never had a problem with the guy at all.”

That changed when Bonnar emerged from his own retirement to sign with Bellator MMA. His arrival came complete with a release announcing his intent to “free the MMA world of the virus that’s known as Tito Ortiz.” The statement drew little more than a chuckle from the MMA community, because the grudge seemed fabricated at best. At no point during their UFC stints was Ortiz-Bonnar on anyone’s fantasy matchmaking wish list.

Ortiz wasn’t laughing at Bellator 123, however, when Bonnar contronted the ex-champ in the cage. In a little bit of sports entertainment showmanship, Bonnar was accompanied by a masked man who turned out to be former Ortiz friend and training partner Justin McCully.

“Everyone says the same thing: He’s the most selfish, self-absorbed, arrogant sack of crap they’ve ever met, and the only thing bigger than his head is his inflated ego,” Bonnar told Bellator MMA commentator Jimmy Smith that night. “Proof of that is right here. This guy [McCully] helped him win many world championships; you might recognize him for being in his corner for all those fights. And all he had to give him in return for thanks was nothing. He flushed him down the toilet like a turd.”

“All I’ve got to say is, poor Jenna , I don’t know how she put up with you all those years,” Bonnar added.

Moments later, a brief scuffle ensued between the two light heavyweights. Whether it was a high or a low moment depends on the perspective of the viewer. What’s not debatable is that the incident got people talking, which was probably the primary goal.

Although the whole ordeal seemed staged, Ortiz claims he had no idea that things would go down the way they did. He was expecting the typical pre-fight sell job.

“I didn’t have a clue. I just thought it was gonna be in the cage. We’d do a face off, we’d talk some smack and that was it,” Ortiz said. “All of a sudden he comes in with a professional wrestling spiel. I was like, ‘What is this guy doing right now? You’re making a fool of yourself.’ Then when he said something about my family, I lost it. I saw complete red.”

Ortiz sees McCully’s involvement in the whole ordeal as little more than a publicity grab for a former fighter looking to recapture a shred of old glory. The whole bit about him being a key component of Ortiz’s heyday was merely a Bonnar exaggeration.

“When they unmasked Justin, I was like, ‘OK, that means you’re not gonna train hard. I’m cool with that.’ But the fact that Justin [was] one of my best friends and turning his back on me like that... I wrote it off, as a I wrote him off a few years ago. The guy is just a leech, and he’s just looking to be a star, in the spotlight.”

In the end, the spotlight will shine brightest on Ortiz, as it often has during his career. Even if his beef with Bonnar began as an invention of Bellator brass, Ortiz’s animosity seems pretty real now.

And even if it isn’t, well, Ortiz has always been pretty good at selling a fight.

“I think this fight is gonna be a barnburner. I’m ready to go 15 minutes at 100 percent the whole time,” Ortiz said. “I’m gonna try to hurt this guy. This ain’t a sportsmanship-like fight. I’m going in, and I’m gonna try to cave his face in. The ref’s gonna have to rip me off.”

« Previous Bellator 131’s Nam Phan: Mike Richman Is ‘A Good Dance Partner for Me’ Next Michael Chandler: The Goal is to Finish Will Brooks »