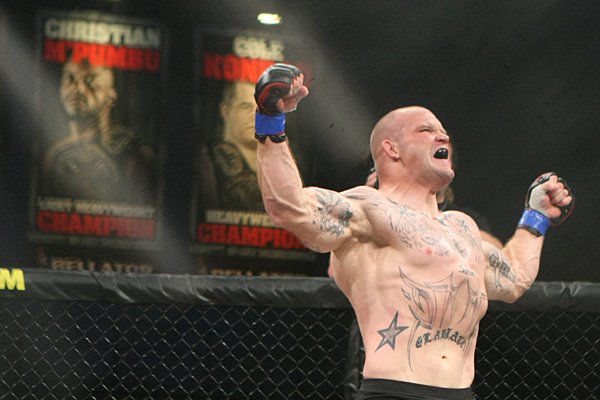 Last October, journeyman extraordinaire Travis Wiuff got his hand raised against Bellator light heavyweight champion Christian M’Pumbu but left Yuma, Ariz., without a piece of gold. Non-title fights be damned, Wiuff easily cleared the first hurdle on his road to a Bellator title shot Friday night, smashing Chris Davis in the first round of their light heavyweight tournament quarterfinal.

Wiuff’s knockout win capped Bellator 71 from the Casino Racetrack and Resort in Chester, W.Va., the first of three events in the organization’s 2012 Summer Series.

Rochester, Minn.’s Wiuff put Davis on the fence immediately and sought a takedown, grinding away with short punches and knees. However, when Davis tried to attack Wiuff’s leg partway through the first period, “Diesel” got to work with punches on his turtled opponent. Davis seemed to avoid most of the damage until one crushing right flattened him, forcing referee Jason Herzog to rescue him at 4:12 of the opening frame. The victory moves the well-traveled Wiuff’s career mark to 67-14 with one No Contest. K. Mills
Vegh's left got it started.
Though Wiuff’s win over M’Pumbu makes him a tournament focal point, the most impressive stoppage of the light heavyweight quarterfinals, however, belonged to Slovakia’s Attila Vegh, who needed only 60 seconds flat to blow away Croatian kickboxer Zelg Galesic.

Galesic, a Bellator middleweight tournament veteran, wanted a striking match with the Slovak but clearly didn’t count on Vegh’s counterpunching power. A massive left hook from Vegh put Galesic on his knees, and “Pumukli” seized the opportunity. He was on Galesic’s back in a heartbeat, squeezing the fight-ending rear-naked choke and earning the victory in a cool minute.

The enigmatic, often flaky Newton looked sharp from the onset, shutting down Boughton’s lunging takedowns and punishing him. In the second frame, Boughton’s desperation turned disaster as Newton shucked him by and dove onto his back, locking up a rear-naked choke. “The Hardcore Kid”, now 17-6-1 added his hooks and earned the tap just 49 ticks into round two. K. Mills
Carpenter got crafty and used
the cage.
In the first of the four quarterfinals, tournament veteran Tim Carpenter made the most of his late replacement opportunity by tapping out Arizona’s Beau Tribolet in the first round.

Carpenter, who was originally set for undercard action against popular Midwestern fixture John Hawk, was called into the tournament before Thursday’s weigh-ins when bracket entrant Richard Hale fell sick with flu-like symptoms.

The 31-year-old Carpenter, whose lone pro loss is to Bellator light heayvweight champion Christian M’Pumbu, found his fight-ending grace after a brief defensive lapse, as Tribolet rocked him and ripped off a series of uppercuts that led to the concluding scramble. After his first armbar attempt was rebuffed, the Philadelphian used the cage for leverage and exploded into the fight-ending armlock at 4:51 of the second round, moving to 8-1 in his career.

The Bellator light heavyweight tournament will continue at Bellator 72 on July 20 from the USF Sun Dome in Tampa, Fla. In the semifinals, Travis Wiuff will take on Tim Carpenter while Attila Vegh and Emanuel Newton do battle with the other spot in the finals on the line.

In his first fight for Bellator, Strikeforce heavyweight veteran Brett Rogers got an anti-climactic but much-needed win over former Ambition MMA teammate Kevin Asplund, halting his fellow Minnesotan after the second round. K. Mills
Rogers put an egg in Asplund's
left eye.
Rogers, 31, broke into the wider MMA consciousness in June 2009 when he knocked out former UFC heavyweight champion Andrei Arlovski in just 22 seconds. Since that bout, Rogers was 1-4 with one No Contest, and was arrested and charged with domestic violence last summer.

The contest was standard heavyweight fare, as Rogers threw Asplund to the mat with a powerful lateral drop and pounded away for the first round, before his pace predictably slowed, and he allowed Asplund time on top in the second round. Before round two was out, Rogers was again on top and doing damage to the left eye of Asplund. The swelling “Da Grim” caused was enough for the ringside physician to halt the contest after the second round.

The win was Rogers’ first since his October 2010 win over Ruben Villareal and moved his career mark to 12-4-1. Asplund’s loss, his first since his September 2002 pro MMA debut, drops him to 15-2.

In a bout co-promoted with Ohio’s North American Allied Fight Series promotion, Josh Stansbury took out Dan Spohn for the NAAFS 205-pound title. Spohn was the aggressor early, but one massive right hook from “The Sandman” left Spohn frozen on the ground and easy fodder for a fight-ending guillotine. The East Liverpool, Ohio, native earned the victory at 2:30 of the first and avenged his November 2009 loss to Spohn, which also came by way of guillotine.

In a stirring comeback, Dulles, Va.’s Neil Johnson rallied in the second round of his featherweight scrap with Brylan Van Artsdalen. Johnson was hobbled by the Daddis Fight Team rep’s leg kick attack early. However, a salvo of knees and punches stunned van Artsdalen and allowed Johnson to dive on his back to secure the fight-ending rear-naked choke in dramatic fashion at 4:29 of the second stanza. Keith Mills
Johnson's comeback was a real
eye-opener.
Hamlin, W.Va.’s Jason Butcher cut Bellator veteran Duane Bastress up on the mat in their middleweight affair. The Jorge Gurgel understudy rushed Bastress with strikes, happily went to his back and locked up a triangle that with some slight adjusting ended the bout just 63 seconds into the bout.

In a 190-pound catchweight affair, Youngtown, Ohio’s Kevin Zalac overcame a fast start from Chris Goldbaugh and chipped away with elbows to take three just scorecards of 29-28.