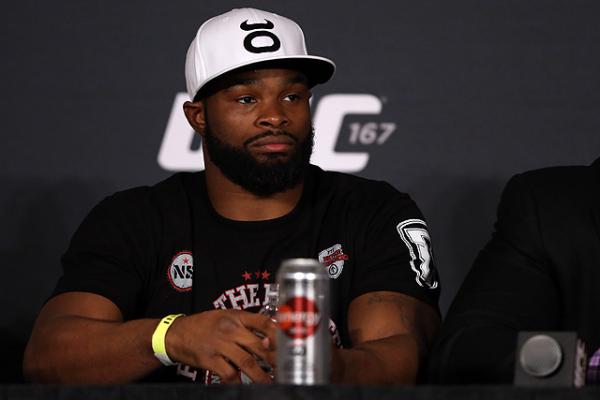 Tyron Woodley could earn a welterweight title shot Saturday if he beats Carlos Condit in the UFC 171 co-main event.

Ahead of the bout, Woodley joined the Sherdog Radio Network’s “Beatdown” show to discuss the matchup, title hopes and more.

On whether he expects a title shot if he wins: “It’s been vocal from Dana [White] that this is the No. 1 contendership fight. According to my interpretation of No. 1 contender, that means that you’re fighting for the world title. I think they matched up this card the way that it should be. The co-main event is the No. 1 contendership bout. The main event is for the world title. I think the winner fights the winner. As far as my knowledge and what I’ve been told is a victory over Carlos Condit puts me in a world title fight.”

On whether he’d fight teammate Robbie Lawler for the title if Lawler beats Johny Hendricks: “It’s the best-case scenario for the team. It’s the worst-case scenario for our friendship probably. … Some training partners from American Top Team I would call associates. I call friends friends and associates associates. Robbie’s actually a friend. I want to see him realize his goal as a world champion, to go out there and beat Johny Hendricks for himself and for the team. I’m just focusing on winning my fight and then support my teammate in his fight. Then after that me and him will sit down and we’ll talk it through and see what we’re both comfortable with, but I’ve got a real good feeling that both of us are going to want to just go ahead and get the fight out of the way and shake hands afterwards and go back to rolling.”

On Condit: “I think Carlos Condit is a phenomenal fighter. It’s funny, if I actually had to think about some of the guys that I enjoy watching fight, he would be one of the top guys on the list. He always brings it. You can never count the kid out even if there’s 30 seconds left in the fight. I remember he finished Rory MacDonald with seven seconds left. Had he not done that, he would have lost that fight.”

On fighting someone as good as Condit: “I think for those type of opponents … I feel like I rise to the occasion. I need that anxiety of what he does to make me train the way I need to train, to be the fighter that I need to be for that fight. It’s an intriguing matchup. You probably couldn’t get a better matchup. One guy’s shorter, one guy’s taller. One guy’s got longer reach, one guy’s more explosive. One guy’s a better wrestler, one guy’s crazy off his back. I think it can be played so many different ways and really makes for almost one of the best fights in the welterweight division and potentially could be Fight of the Night.”

On the 15-minute time limit as opposed to a five-round 25-minute bout: “I don’t care how good of shape Carlos Condit is in, he’s got 15 minutes to get it done. He can have the ability to go for 45 minutes, but we’re fighting for 15 minutes and I feel like with him, his advantage is actually endurance and trying to impose his will on his [opponent]. … I think it’s my time. I think that it’s my year. I think that I’ll prove that in this fight, and in 15 minutes I’ll get the job done, if not less.”