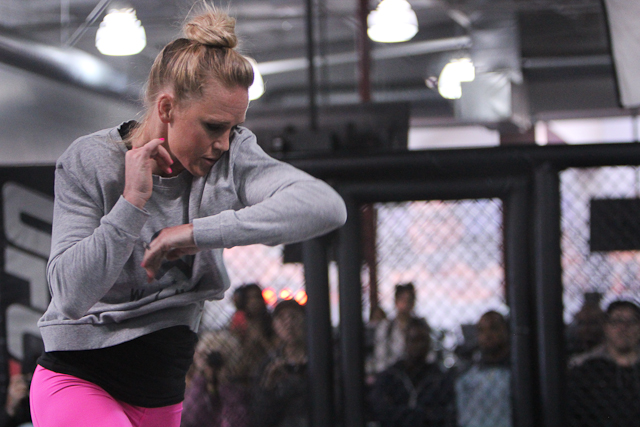 Holly Holm believes she can cause an upset in Melbourne. | Photo: TJ De Santis/Sherdog.com


When Holly Holm steps into the Octagon to face Ronda Rousey at UFC 193, it will have been 1,443 days since her last professional combat sports defeat.

Although she faces long odds against Rousey come Saturday night, it won’t be the first time the Jackson-Wink MMA representative has stared down doubt and skepticism.

On Dec. 2, 2011, Holm suffered a cringe-worthy knockout loss to Frenchwoman Anne Sophie Mathis in a boxing match at Route 66 Casino in her home state. It was the first loss for “The Preacher Daughter” in 24 professional bouts, a streak that dated back to 2004. What raised concern wasn’t so much that the loss occurred, however, but how it happened.

Mathis battered, bloodied and floored Holm in the sixth frame, and the dazed Albuquerquean ended the round in obvious peril as she staggered around the ring. In the seventh stanza, Holm found herself briefly trapped in the ropes after eating another slew of punches. Referee Rocky Burke somehow let the contest continue, and moments later, a practically defenseless Holm was sent crashing down into the ropes and the fight was mercifully halted.

In the aftermath, Burke took serious heat from critics and pundits for allowing Holm to fight as long as she did, particularly after the fighter became tangled in the ropes moments before the knockout occurred.

“I don’t think Rocky had the best night of his career,” Holm’s manager, Lenny Fresquez, told the Albuquerque Journal. ”... I do think he should have stopped the fight earlier [in the seventh round].”

It was a rare sight to see the technically sound Holm engage in a slugfest with an opponent, and it ultimately led to her demise. For most of her boxing career, and during her mixed martial arts foray as well, Holm has made her living on the outside, relying on movement and angles while avoiding serious damage. Holm later admitted to the Albuquerque Journal that she strayed from longtime coach Mike Winkeljohn’s game plan in the defeat.

Due to a rematch clause in their contracts, Holm and Mathis dueled again at the same venue seven months later. This time, a more strategic approach -- as well as a larger ring -- allowed Holm to avoid taking a similar amount of punishment en route to winning via unanimous decision. She hasn’t lost in boxing or in MMA since.

So when Holm is faced with doubters who question her ability to hang with Rousey, she finds herself drawing upon the experience that allowed her to rebound from the most devastating loss of her career to date.

“I’ve been the underdog more than once, and it’s fine with me. Every day in training I’m up against great training partners. Every day is a test for me so I don’t mind being an underdog,” Holm said during a recent conference call.

“I’d been knocked out cold by the French champion Anne Sophie Mathis and 21 out of her 24 wins were by KO, and hadn’t lost in 17 years, and she had just knocked me out,” she continued. “And I took the rematch with her because I believed I could beat her, and a lot of people thought I was crazy for doing that, and it was a huge thing that I took on, but I was able to get in there and avenge my loss and beat her.”

Meanwhile, Rousey has been a destructive force during her MMA career, finishing all but one of her 12 victories inside of a round. Her last three title defenses have lasted a combined 64 seconds. Holm, meanwhile, has gone the distance in her first two Octagon appearances, taking decision triumphs over Marion Reneau and Raquel Pennington.

Holm’s opportunity came earlier than anticipated, but even with the UFC’s promotional campaign focusing on her unblemished record in MMA and championship credentials in boxing, few outside her inner circle are giving the challenger much of a chance. Not surprisingly, the Las Vegas-based promotion has made no mention of Holm’s loss to Mathis. That’s OK, because Holm herself can play that -- and their subsequent rematch -- back in her head as inspiration as she readies herself for a champion known for making Instagram-friendly highlight reels out of respectable opponents.

“There’s been times I had to face opposition like that and had to believe in myself to get in there,” Holm said. “And I’ve done it before, but those times are when the victory is even better. The more that you go through for a fight and the more challenge that you’re up against, the better the victory is.”