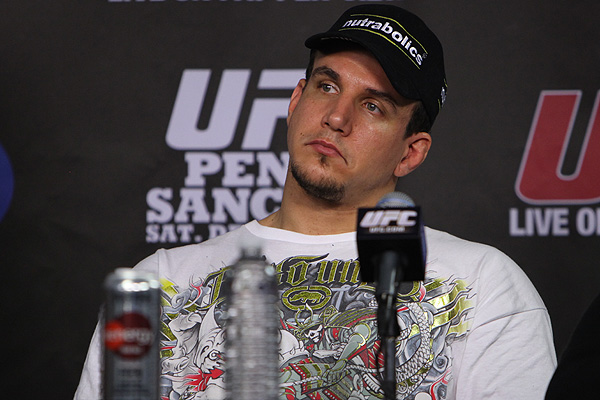 It appears that Frank Mir is going to get another shot at championship gold a little sooner than expected, as he will lock horns with reigning champion Junior dos Santos in the UFC 146 main event.

UFC President Dana White announced the news on his Twitter account late Friday evening: “May 26th is now Mir vs. JDS for the HW title in Las Vegas at the MGM Grand,” he wrote.

UFC 146 was originally scheduled to be headlined by a heavyweight title tilt between dos Santos and former Strikeforce king Alistair Overeem. However, a random drug screening following the UFC 146 press conference on March 27 revealed that Overeem’s testosterone to epitestosterone ratio was 14-to-1, more than double the allowable limit.

Overeem is scheduled to appear before the Nevada Athletic Commission on Tuesday, but it is now unclear if he will have a place on the May 26 card even if he is granted a license to fight. Mir was initially expected to face Cain Velasquez in a No. 1 contender’s bout in the evening’s co-main event. No replacement opponent for Velasquez has been announced at this time.

Mir is no stranger to title fights. The 32-year-old Las Vegas resident first became UFC heavyweight champion by submitting Tim Sylvia with an armbar at UFC 48. He was stripped of the title after injuries suffered in a motorcycle accident kept him out of action for more than a year. Mir later captured the interim belt by knocking out Antonio Rodrigo Nogueira at UFC 92, a title he would lose to Brock Lesnar in his next appearance at UFC 100.

A Brazilian jiu-jitsu black belt, Mir has won his last three fights, earning victories over Mirko Filipovic, Roy Nelson and Nogueira. All but two of his 21 professional fights have been contested in the Octagon.

Dos Santos became champion with a 64-second knockout of Cain Velasquez at UFC on Fox 1 this past November. The Brazilian is unbeaten in eight Octagon appearances and has finished six of those victims via strikes. Along with dos Santos-Mir, the UFC 146 main card is expected to include three other heavyweight fights: Roy Nelson-Antonio Silva, Gabriel Gonzaga -Shane del Rosario and Mark Hunt-Stefan Struve.