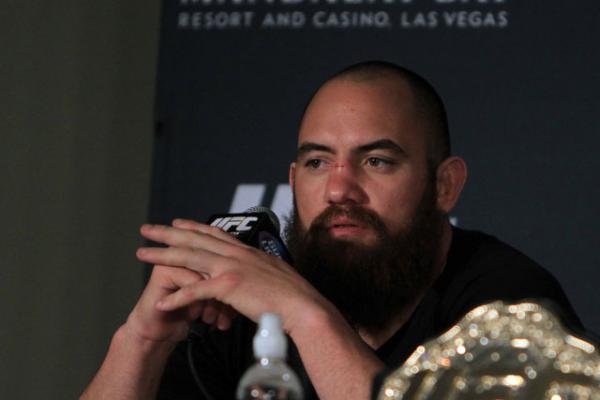 Travis Browne has been cleared of domestic violence allegations by the UFC. | Jeff Sherwood/Sherdog.com


The Ultimate Fighting Championship has reinstated Travis Browne after finding what it determined to be “inconclusive evidence” regarding domestic violence allegations against the heavyweight fighter.

Browne’s wife, fitness model Jenna Renee Webb, posted pictures on Instagram in July of bruises on her arms , legs and face and alleged that the injuries were caused by the 6-foot-7 fighter. The UFC responded by suspending Browne and pulling him from all International Fight Week events.

In a statement released on Friday evening, the Las Vegas-based promotion revealed the results from its investigation into Renee’s claims.

“Conducted by a former FBI agent with more than 25 years of experience, the seven-week investigation included interviews with multiple subjects associated with the principals, as well as the principals themselves,” the statement read. “The investigation found inconclusive evidence to support claims of alleged domestic violence involving Browne and inconclusive evidence that Browne had violated the UFC Fighter Conduct Policy.

“As a result, UFC has lifted Browne’s temporary suspension and anticipates him returning to competition in the coming months,” it continued. “UFC takes allegations of domestic violence very seriously, and they will be investigated for their validity. If proven true with facts, it will result in swift action on our part.”

Browne last competed at UFC 187 in May, when he suffered a first-round technical knockout loss to Andrei Arlovski. The Hawaii native is 8-3-1 during his promotional tenure. A full summary of the Browne investigation as provided by the UFC is as follows:

Upon learning of the posting of photographs on social media on or about July 8, 2015 by an individual reflecting bruises on their person and corresponding commentary that Travis Browne had committed the acts resulting in the bruising, UFC, through the Las Vegas-based law firm Campbell & Williams, began efforts to retain a third party to conduct a thorough, independent investigation into this matter. In mid-July, Campbell & Williams retained a private investigator with more than 25 years of experience as a Supervisory Special Agent in the Federal Bureau of Investigation operating out of the Los Angeles Field Office and as a Special Inspector General for the United States of America. The investigator has overseen countless investigations involving thousands of witnesses and subject interviews.

As part of his nearly two-month investigation into the Browne matter, the investigator and his colleagues interviewed nearly a dozen individuals located in several states. The interviewees included the principals of the investigation, former spouses, individuals with close personal relationships and health-care professionals. Additionally, the investigator obtained various forms of electronic data reflecting interactions of the principals with each other and third parties. The investigation also included electronic and hand searches for relevant civil and criminal records, law enforcement service-call records and the like.