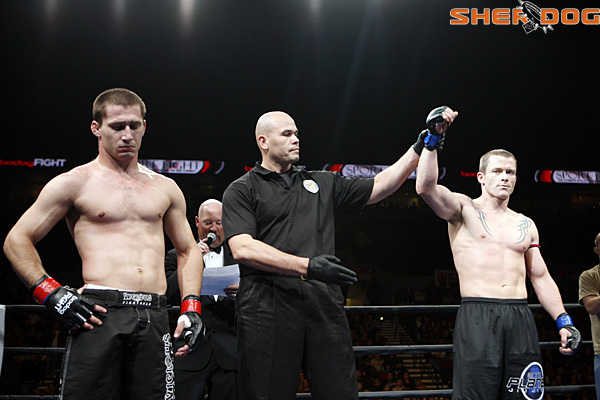 
Ultimate Fighting Championship veteran Gerald Strebendt pleaded guilty on Thursday to a charge of criminally negligent homicide with a firearm for the shooting death of a man in an alleged road rage incident in Springfield, Ore., last year, according to a report from The Register Guard.

Strebendt, who was initially charged with murder for fatally shooting David Paul Crofut after Crofut’s vehicle collided with his truck on Jan. 29, 2014, opted for a plea bargain that will sentence him to four years and 10 months in prison. Strebendt will receive credit for the 15 months he has already spent in prison and with good behavior, could be released sometime in late 2017, according to the report.

Strebendt had claimed self-defense in shooting Crofut, who was unarmed and intoxicated, but his lawyer, Mike Arnold told The Register Guard that the former fighter ultimately decided that accepting the plea deal was his best option. If he had been convicted of murder, Strebendt would have had to serve at least 25 years behind bars.

“It was an honor and a privilege to represent Gerald Strebendt,” Arnold said. “Today is a sad day for all involved, but I respect his decision to take control of his life by settling this case.”

Crofut’s blood alcohol level was nearly twice the legal limit at the time of the accident. According to The Register-Guard, Strebendt called 911 after the collision and shot Crofut while he was on the phone. While Strebendt allegedly chased down Crofut and caused the accident with his aggressive driving, Crofut’s DNA was found on the rifle with which he was shot. Strebendt told the emergency dispatch operator that Crofut had reached for his rifle.

“While the investigation clearly established the role of Mr. Strebendt’s aggression in causing the initial vehicle collision with Mr. Crofut, it also showed that Mr. Crofut continued to approach Mr. Strebendt even though he knew Mr. Strebendt was agitated and armed with a firearm,” Lane County District Attorney Alex Gardner said. “The victim’s behavior did not justify Mr. Strebendt’s actions but, together with Mr. Strebendt’s mental condition, it contributed to the tragic end result.”

As a result of the plea, Stredbendt, a former Marine sniper, will not be allowed to own or possess weapons for the rest of his life. In addition, he must undergo a psychological evaluation as part of his sentence.

Strebendt began his pro MMA career in 2001 and posted a 6-2 record before making his lone UFC appearance opposite Josh Thomson at UFC 44. Following that 2003 defeat, “The Finishing Machine” would go 3-4 in his next seven outings, last competing in January 2008. Over the course of his career, Strebendt also competed against the likes of Eiji Mitsuoka, Charles Bennett, Sean Sherk and Vitor Ribeiro.

Prior to his arrest, Strebendt owned and operated the Northwest Training Center in Springfield, Ore.