HOFFMAN ESTATES, Ill. -- Two former Zuffa fighters trying to fight their way back into the big leagues picked up wins on Friday at Xtreme Fighting Organization 39 within the confines of the Sears Center Arena.

The crowd was clearly 100 percent behind Curran in the final fight of the evening, with Billy Vaughan receiving nothing but boos. Curran showed early that he was looking to land inside leg kicks and lead hooks to counter any striking of Vaughan. Curran stood within range and countered early in the first round, visibly frustrating Vaughan. With his counters and blocks, while throwing side kicks to the body whenever Vaughan refused to act first.

As the first round went on, Curran continued to find a home for his lead left hook, tattooing Vaughan's face. As a Curran head kick glanced off his head, Vaughan drove for a takedown, only to end up in a tight guillotine. Vaughan escaped into Curran's guard, laying back for a leglock at the bell.

The crowd grew restless throughout the second round, but in the third round, Vaughan switched up his attack, taking Curran down but then getting stuck in his guard. Curran remained in control off his back, defending well and threatening with an armbar and a kimura, which he used to escape and take Vaughan's back.

Vaughan slipped out the back as Curran sought to sink in the choke, resuming his struggles from within Curran's guard. Curran again escaped, attempting to lock up an inverted triangle. The choke did not seem to be effective, as Vaughan struggled to escape for a prolonged period, with Curran riding in control and landing the occasional pot shot.

With 30 seconds remaining in the fight, Curran released the hold and fought on until the final bell. The judges unanimously awarded every round to Curran, who seemed less than pleased with his current situation. With the win, the "Big Frog" moved to 33-13-1.

“This is the last damn time I'm fighting in the XFO," said the fighter and co-promoter Curran. “I'm not fighting anywhere but the UFC. If they don't want me, then I'm done."

"It's UFC or bust, man," Curran told sherdog.com following the bout. "The Big Frog" also blamed his inability to finish the inverted triangle on an injured foot, hurt when Vaughan blocked a kick. 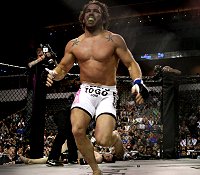 Moving up to welterweight for this fight, Varner came out very fired up, pressing the action with his jab and hooks. Varner shot a double-leg when Combs planted to return fire. Varner punched furiously from the guard, passing to north-south on a Combs upkick and quickly locking in a choke. As Combs went limp from the choke, referee Scott Fischer rushed in to call the technical submission, and an ecstatic Varner vaulted out of the cage to celebrate. The official time was 1:30 flat in the first round.

In women's action, Nicdali Calanoc met Chicago's Felice Herrig at 115 pounds for a gritty three-round affair. "The Night Queen" walked to the cage shouting “Yes!” over and over again, in the style of Diego Sanchez, but once the bell rang, she had little to be positive about. Herrig was the crisper, harder puncher when separated, but the majority of the fight featured no space between the fighters, as Calanoc repeatedly forced a clinch.

In the early going, Herrig controlled in the clinch with knees to the thighs and body, with Calanoc struggling to assert herself and landing half the volume of Herrig. As the fight wore on, Herrig became more dominant, spending long stretches of the bout with back control, searching for a choke that never materialized.

When the final bell rung on the grudge match, Herrig stood and engaged in some light taunting of her opponent before shaking hands and being awarded her unanimous decision victory. No scores were announced. 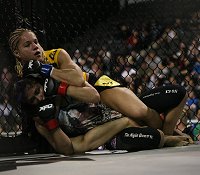 
At a 180-pound catchweight, Team Curran member Michael Stumpf used superior grappling to out-position Chicago's Dan Bolden to a unanimous decision. The slow-paced fight featured dominant positions for Stumpf, but the Curran pupil was unable to capitalize despite his technicality superiority.

In the bantamweight division, Dan Aguirre forced referee Scott Fischer to call a stop after Terrance Kinney went limp in a deep triangle choke with Aguirre landing strikes to the trapped and unconscious opponent's face. The technical submission came 2:20 into the first round.

The decision was roundly booed by a partisan crowd. The action was competitive throughout, with Gwaltney loading up on heavy punches and Murphy struggling for takedowns and control. Gwaltney fought wildly throughout, showboating at times and attempting a soccer kick on a downed Murphy that did not land, although Gwaltney did manage to land illegal upkicks on Murphy while Murphy was riding a reverse mount.

In some wild 125-pound women's action, Amanda LaVoy came back from being dropped twice in the first round by Michele Gutierrez to land a flurry of knees in the second. These blows opened a nasty cut over Gutierrez's left eye that forced ringside physician Joseph Alleva to advise referee Scott Fischer to call a stop to the fight 24 into the second round, leaving Gutierrez visibly disappointed and very, very bloodied. 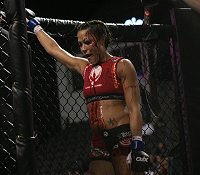 P.J. Cajigas met Kent Rexford Jr. at a catchweight of 190 pounds. Rexford forced Cajigas to tap with a rear-naked choke, ending the fight at 4:47.

Midwest Training Center's Daniel Stittgen forced Jason Graves to tap to quick armbar in a middleweight affair, stopping the action only 70 seconds into the bout.

In a lightweight affair, Chicago's Will Brooks topped off a one-sided beating with an armbar from mount that forced Robert Reardanz to tap out at 3:22 of the third round.

In the lightweight curtain jerker, Hector Garcia knocked out Nicholas Scotti with a flurry of punches. Referee Scott Fischer called a stop to the short-but-furious fight 13 seconds into the first round.