BELEM, Brazil -- The biggest stars of the ninth edition of Belem's Iron Man Championship, welterweight Sergio "Junior" and heavyweight Geronimo "Mondragon" dos Santos, were the favorites to take titles Thursday night. However, the underdogs, Marinho Rocha and Dirlei "Mao de Pedra" Brundestuki, stole the show and surprised the 1,200 in attendance at the Pan-Amazon Brazilian-Japanese Association Gymnasium.

In the main event, Junior had a hard time imposing his standup game over the boxing-oriented Rocha. A student of famous boxing coach Ulysses Pereira -- who has trained Wanderlei Silva and Lyoto Machida in the past -- Rocha supplanted his smaller size and reach with aggression. Both first and second rounds were even, classic 10-10 rounds, but in the third round, Junior finally took Rocha down and spent two minutes in a totally dominant position. The offense should have given him the close win, however, the judges saw it differently, as the hometown favorite Rocha took the split decision.

“I told Marinho after the fight that people will see that fight on Combate [a Brazilian fightsports channel] next week and that it will be bad for him. If I were Marinho I would return the belt to the event and face me in a neutral place,” said a disgusted Sergio Junior, who is heading to England next week, where he will train with Renovacao Fight Team affiliate Marcelo "Brigadeiro" and Team Kaobon, and has already lined up two fights. 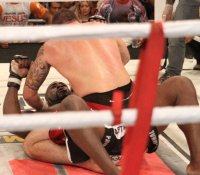 M. Alonso
'Mondragon' gassed, allowing his
opponent to take over the fight.
Unlike Junior, "Mondragon" looked like the real favorite from the opening bell of his bout with "Mao de Pedra." Dos Santos totally dominated the first round. Looking in much better shape and showing much better boxing technique, it seemed the hulking dos Santos would knock out his smaller, less experienced foe.

Originally from the southern state of Rio Grande do Sul, Brundestuki, a local wrestling champion, weighed 225 pounds to dos Santos' 265-plus. Early against dos Santos, his entire gameplan was survival.

“We knew that as soon as he gets tired, he totally changes and that was our tatic," Brundestuki told Sherdog.com after the bout.

And that’s exactly what happened: "Mondragon" returned to the second round clearly tired and Brundestuki started to capitalize, taking his opponent down and pounding him. The mount of "Mao de Pedra" exhausted dos Santos, and when "Mondragon" finally escaped and stood up, he dizzily collapsed into the ropes. Referee Marcelo Dourado asked if he wanted to continue, and the Paraense giant stood up. However, upon regaining his footing, "Mondragon" decided to quit, giving Brundestuki the heavyweight crown.

“I was invited to fight Mondragon a few weeks ago. I hope that now other events will [call] me to fight in my own division," said the light heavyweight hopeful.

The event wasn't all surprises, however. 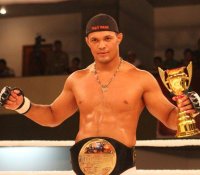 M. Alonso
Andre Lobato called out 'Crocota'
after taking gold.
"When opponents don't use Vaseline like 'Crocota' [allegedly] did, I submit them," said the new champion. "I hope he agrees to face me, in my weight class, but this time, without Vaseline."

Lobato, now 19-2 in MMA, met "Crocota" last October at Jungle Fight 23, and was submitted with an anaconda choke in the second round.

Upstart welterweight Marcio Henrique Castanheira broke Edilson Moicano's arm with a kick, forcing him to quit at 1:42 of the first round.

In lightweight action, popular local Rafael "Manteiga" Bastos defeated Jamil Silveira by unanimous decision in an impressive striking battle. Also in the division, Mauricio "Mauricinho" Para knocked out "Macaquinho" Rodrigues at 2:16 of the first round, while Caco Tractor won a unanimous decision over Bruno Lobato.