HONOLULU -- Falaniko Vitale retained his X-1 World Events middleweight title Saturday night at the Neil S. Blaisdell Arena, knocking out X-1 welterweight champion Dylan Clay with a brutal uppercut in the opening round in the headliner of "Champions 3."

The two champions took to the center of the cage, where the younger, lighter Clay was expected to have the speed advantage. Clay fired away from the outside to the legs of Vitale, connecting with solid strikes that forced the Hawaiian to switch up his stance and close the distance. 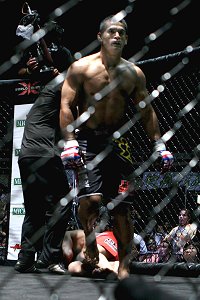 J. Meinhardt
'Niko' was victorious.
"My goal was to get inside and stay inside. I wanted to pressure and lead with my hands," Vitale said after the bout. "I was able to push him up against the fence, and then he squared up on me and I was able to throw that uppercut, the right uppercut, and it landed and knocked him out. It was part of the game plan we had, and I was fortunate enough to get it."

The devastating uppercut came at just 2:04 of the first round and needed no follow-up strikes, as referee Chris West immediately stepped in to save the unconscious Clay.

After the bout, Vitale, who has not lost a fight in the islands since February 2006, relinquished his X-1 middleweight belt in anticipation of his move to Bellator Fighting Championships, with which he recently signed a multi-fight contract. The Hawaiian will next square off against Bellator middleweight champ Hector Lombard in a non-title affair set to take place at Bellator 44 in Atlantic City, N.J., on May 14.

“I just want to fight the best guys in the world, and Hector Lombard is one of those guys,” Vitale said.

“I feel like I’m competent enough to compete with Hector, and I’ll just be ready, you know.”

At just 19 years old, Holloway impressed many in attendance by not only going the distance with the champion but besting him in the later rounds to secure victory in a close split decision win. 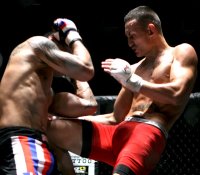 "It was one pretty tough fight, but I felt my second wind coming in the fourth round," Holloway said post-fight. "People were doubting [me], telling me that he was going to be dominant if we went into the later rounds, but I guess I proved them wrong."

The young Holloway showed no fear, stopping most of Sarmiento’s takedown attempts and landing a wide array of strikes, including jumping knees and elbows over the course of the fight. In the fifth round, Holloway dropped Sarmiento with a well-placed knee to the midsection but was unable to stop the savvy veteran.

In the "Fight of the Night," Ricky Wallace battled back from an early deficit to defeat Eben Kaneshiro and retain his featherweight title.

In the opening frame, Kaneshiro went to work early with his submission game, taking Wallace’s back and immediately working on a rear-naked choke, then a triangle, then an armbar. Wallace escaped, but Kaneshiro unleashed with a flurry of strikes that cut Wallace above his left eye and then dropped him with a spinning back fist just before the round ended.

Bloodied but not beaten, "Hoku", a longtime student of UFC veteran Chris Leben, came out in the second round and put on a performance his coach would be proud of. The determined Wallace went blow-for-blow with his opponent, eating as many punches as he dished out before landing a digging right hook to the body of the physically spent Kaneshiro; the blow sent him crashing to the mat, where “Hoku” followed up with punches until referee Chris West finally halted the bout at 2:01 of the second round.

Kona’s Van Oscar Penovaroff impressed again, though this time not with his knockout power but his submission prowess, submitting Thomas Matias via rear-naked choke at 3:04 of the opening frame. 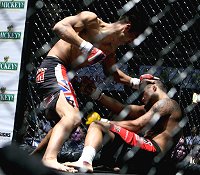 J. Meinhardt
Sproat crushed Mansanas.
Molokai’s "Sale" Sproat also impressed, connecting on Collin Mansanas with a right hook which left him slumping to the mat, back against the cage. Sproat unleashed with a barrage of hooks until West jumped in to save the downed fighter at just 1:28 of the first round.

Gracie Technics’ Dustin Kimura survived an early onslaught from Kurrent Cockett before eventually catching the Maui fighter in a slick armbar from the guard. The tap-inducing lock came at 2:58 of the first round. Zane Kamaka also took to wrenching on his opponent’s arm, tapping Jordan Kekino with a kimura from his back at 3:21 of round one.

Raquel Pa’aluhi got back on the winning track, scoring a technical knockout over California’s Nikohl Johnson. Pa’aluhi controlled most of the fight after escaping an early guillotine attempt, mounted Johnson in the final round and pounded away until referee Steve Miyamoto showed mercy and halted the contest at 2:06 of the third round. 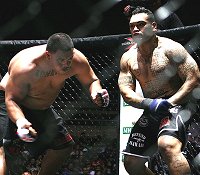 In the evening’s opening match, Paea Paogo earned a technical knockout when opponent Kala Koa could not answer the bell at the beginning of the third round in the amateur heavyweight bout.