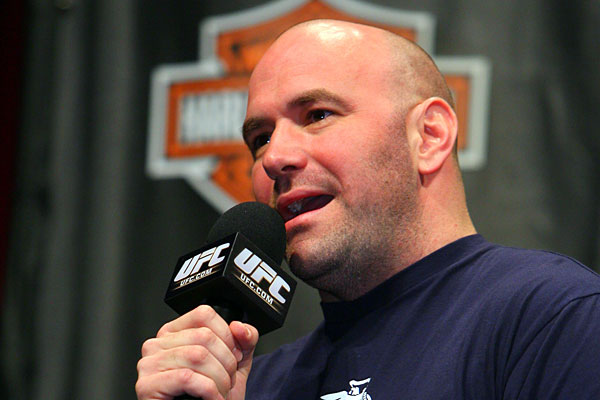 • Ben Rothwell has a stomach virus that was diagnosed as soon as he landed in Australia.

• B.J. Penn is pretty close to cleaning out the lightweight division, and White is a believer in people moving up after they have done this. Penn would need to beat a top-ranked contender before getting another shot at GSP, though.

• Frankie Edgar is the guy that White is most impressed with in the lightweight division, and that’s why he deserves the shot at Penn. White was very impressed with Edgar in his win over Sean Sherk.

• White said Nick Diaz is hard to work with and doesn't work well with athletic commissions, but he likes him.

• He’s interested in Gegard Mousasi and thinks he is one of the best in the world, but he has two contracts right now, so White will take a closer look at him when they are done.

• He’s confident that the UFC will eventually get Fedor. He said the problem with M-1 is that they are more interested in building M-1 as a promotion than building Fedor.

• White said that Stephan Bonnar and Forrest Griffin are not going anywhere and they are like his kids. They will always fight in the UFC regardless of their records.

• Wanderlei Silva is also always going to be in the UFC no matter what happens.

• White thinks that Anderson Silva is too big for GSP. Forrest walks around at 230 pounds, and White said Anderson is about the same as Forrest. He is just too big for GSP, but there are lots of interesting matches at light heavyweight for Silva.

• He thinks that Shinya Aoki is overrated because he hasn't faced consistently tough competition like fighters do in the UFC.

• He said he’s happy for Quinton “Rampage” Jackson and thinks “The A-Team” movie will do really well. If his movie looked like the other movies that fighters have been starring in, White said he would have been mad at him. He will be back fighting soon.

• The UFC is not interested in Bobby Lashley right now.

• White respects James Toney but said he doesn’t know what the UFC could do for him.

• White likes Kimbo Slice -- he wasn't what he expected -- but White doesn't consider him a legitimate contender.

• The next three countries for the UFC are China, South Korea and India. Lorenzo Fertitta will be going overseas for the next three weeks to work on getting a TUF season in those countries.

• The UFC is working to get into Japan, but it isn't easy. White doesn’t know if the Pride brand could be resurrected.

• Brazil wasn't a target for future expansion initially, but since the country secured the Olympics, the UFC is now very interested in holding an event there.

• Given the interest that Australia has shown already in the UFC, there will be at least one show a year in Australia from now on.

• White said he laughs when people call Strikeforce “big.” He said their model doesn't work. White doesn't want them to go away, but he said they are going to fail because they are trying to be too big and are poorly organized.

• He thinks that the WWE is a totally different business model with a different fan base. White doesn't think that they are hurting each other apart from sharing PPV dates.

• White said eventually he thinks knees to the head of a grounded opponent will be legalized and he personally likes them. He said perhaps after everything is standardized and fears about the sport have passed, it will be possible.

• He said Herb Dean is the best referee in the history of the sport. The possibility of getting a helmet cam for referees is slim, but White said that if they ever did get it, Steve Mazzagatti could fit the camera inside his head because there is a lot of room in there.

• There will be no changes to any of the divisions and no new divisions, including heavyweight. Boxing has too many champs, and White doesn't want the UFC to go down the same path.

• The UFC won't do rankings. White doesn't like rankings but instead likes to put on the fights that the fans want to see.