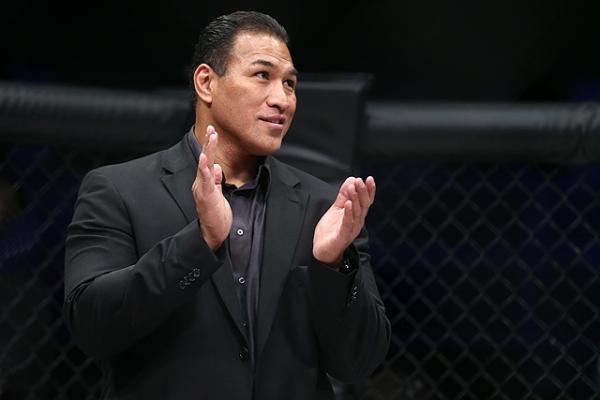 Ray Sefo has made the transition from fighter to executive. | Photo: Dave Mandel/Sherdog.com.


World Series of Fighting President Ray Sefo may be an executive, but he remains a fighter at heart -- which is why it should not shock anyone to hear that he does not consider himself retired from competition just yet.

“I would love to fight one more time,” the 44-year-old Sefo told Sherdog.com, “but it’s a matter of timing and what makes sense. If time permits and it makes sense, then I’d like to fight one more time, but I think I have to be real and honest with myself and realize that time is ticking away for me. I don’t have long to fight again. I was kind of thinking by the end of this year. The timeline could be longer, but now I’ve said it out loud and I want to be true to myself. Time is a factor, but honestly, it’s a matter of timing and whether the right opportunity presents itself. If everything aligns, you’ll see me fight again.”

A six-time muay Thai world champion and eight-time K-1 World Grand Prix participant who also has four professional MMA fights to his credit, Sefo would not say whether his final fight would be a kickboxing bout or an MMA fight. Instead, he prefers to find the best situation for him and his skill set.

“I love both kickboxing and MMA, so I’m open to whatever presents itself,” said Sefo, who trains at Xtreme Couture in Las Vegas. “I’m in the gym every day. I still spar two or three times per week and drill in the mornings. Should I get a fight, the only difference would be that the intensity level would go up. For me, fighting is something I enjoy. I enjoy the competition, discipline and respect. The main factor for me is making time to train for a fight; and I’m not getting any younger. I don’t want to get in there and look like an old man and be slow.”

Sefo last fought in MMA in August 2013, falling to Dave Huckaba via second-round knockout at WSOF 4. Since then, he has focused on growing the World Series of Fighting brand. He said making the transition from fighter to executive was not as difficult as one might think.

“It wasn’t hard at all,” said Sefo, who owns a 56-22-1 record as a kickboxer. “After fighting the best in the world, anything after that is easy. I didn’t find any difficulty with it. Everything I do is fight-related and is a big part of my life, but I also enjoy doing what I do for WSOF. It was a very positive change for me. Not one time has it been difficult for me. At WSOF, we’re providing opportunities for young, up-and-coming fighters, as well as well-known guys that people already know. It’s an honor to provide that.”

The WSOF has hired a new chief executive officer in Carlos Silva and chief financial officer in Barry Pincus in recent months, and Sefo feels the organization as a whole is going in the right direction.

“I think with the changes we’ve made with the new CEO and CFO that things are going well for us,” he said. “Both of them are well-respected in their field, and our movement has been very positive. I couldn’t be any happier with the direction we’re going. It’s been a lot of hard work, but it’s been received very well. Everybody’s on the same page. We’re trending really positively right now and moving forward positively.”

The WSOF’s next event will be held on Nov. 20 at the Comerica Theatre in Phoenix. It will be broadcast on the NBC Sports Network and will be headlined by an eight-man, one-night tournament in the lightweight division -- one of the promotion’s efforts to carve out its own niche in the MMA landscape.

“I think when you look at where we are now, two and a half years after we started, it’s all been a building process,” Sefo said. “A lot of the guys on our team are very experienced at what we do. The team trusts each other and works together with the same mindset. It’s a team where everybody comes together to make the best decision because multiple minds are better than one. We’re fortunate to have partners like IMG and NBC and especially the fighters on our roster. Our last show was our best show to date. Everybody showed up and put on a good show. When you have guys that go out there and put it on the line, it makes the show shine. The biggest challenge for us is ourselves. When we make a mistake, we make sure not to let it happen again. We just want to continue to improve.”

Sefo promised fans that they can expect to see more tournaments and other unique events from the promotion in the future.

“I think fans will see us continue to improve as we grow,” he said. “The tournament we have coming up is different and never really been done before, so things like that are going to set us apart, I think. It’s a challenge but a positive challenge for us. I think fans want to see things like the tournament. They’re popular from my days of fighting with K-1. It distinguishes us, and it’s fun when you’re a part of something like that. We’re looking to do more of that and see how it goes.”