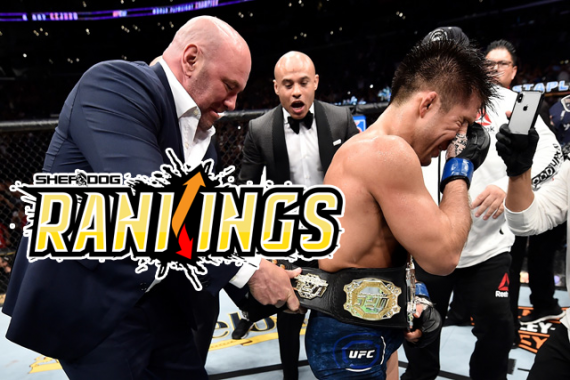 For the first time in nearly six years, someone other than Demetrious Johnson has taken up residence in the flyweight penthouse.

Henry Cejudo leaned on takedowns and top control, as he captured the undisputed Ultimate Fighting Championship flyweight title with a split decision over Johnson in the UFC 227 co-headliner on Aug. 4 at the Staples Center in Los Angeles. All three cageside judges scored it 48-47: Sal D’Amato and Ron McCarthy for Cejudo, Marcos Rosales for Johnson. The loss snapped a 13-fight winning streak for “Mighty Mouse” and brought an end to his historic reign atop the 125-pound weight class at 2,142 days. Cejudo’s upset makes the 2008 Olympic gold medalist the No. 1 flyweight in the latest Sherdog.com divisional rankings, while Johnson falls to No. 2.

Meanwhile, T.J. Dillashaw strengthened his claim as perhaps the greatest bantamweight of all-time, as he knocked out Cody Garbrandt in the first round of their rematch and retained his championship in the main event. Since his controversial split decision defeat to Dominick Cruz in January 2016, Dillashaw has beaten Raphael Assuncao, John Lineker and Garbrandt (twice) in succession. At 32, he has no equal at 135 pounds, though a possible showdown with former World Series of Fighting champion Marlon Moraes or a second encounter with Cruz looms on the horizon.

Finally, Renato Carneiro announced his arrival as a full-fledged contender in the featherweight division with a rear-naked choke submission on Cub Swanson. Carneiro, 29, has rattled off back-to-back victories since suffering his only career setback in a July 2017 submission loss to the unbeaten Brian Ortega. His latest conquest pushes “Moicano” to seventh on the featherweight list, while Swanson falls to No. 8.