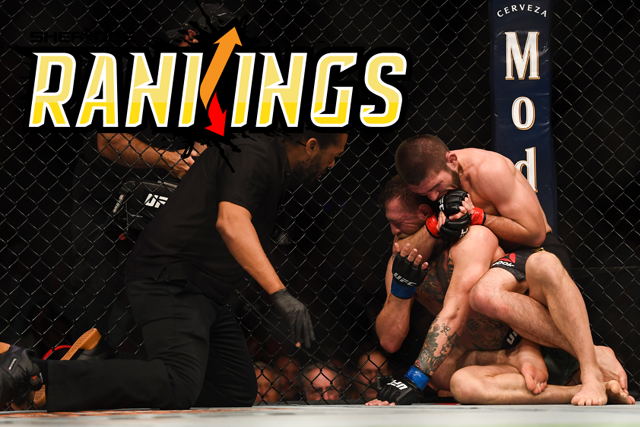 What should have been a celebration of the biggest victory of Khabib Nurmagomedov’s career to date devolved into something else entirely at UFC 229 on Saturday night.

Instead of breaking down the Dagestani’s fourth-round submission of Conor McGregor, we’ve been left to discuss the ramifications of the post-fight melee that erupted moments after the Irishman tapped to a neck crank at the T-Mobile Arena in Las Vegas. Will Nurmagomedov face a lengthy suspension for his actions, or even worse, will he be stripped of the lightweight crown? Only time will tell. For now, one thing is clear: “The Eagle” reigns supreme at 155 pounds. Meanwhile McGregor, the UFC’s biggest star, re-renters the lightweight top 10 at No. 5.

There were plenty of other fights that affected the rankings on a loaded UFC 229 bill. If anyone could lay claim to being the next No. 1 contender at 155 pounds, it’s Tony Ferguson, who scored an impressive stoppage of ex-champ Anthony Pettis in the UFC 229 co-main event. “El Cucuy,” with 11 straight wins, is a clear-cut No. 2. Elsewhere, Derrick Lewis continues to climb the heavyweight ladder, as his Hail Mary knockout of Alexander Volkov moves him up to third in our latest poll. And Jussier da Silva is making it harder to deny him a shot at flyweight gold following his third straight win, a decision triumph over Sergio Pettis, who falls to No. 7 in defeat.