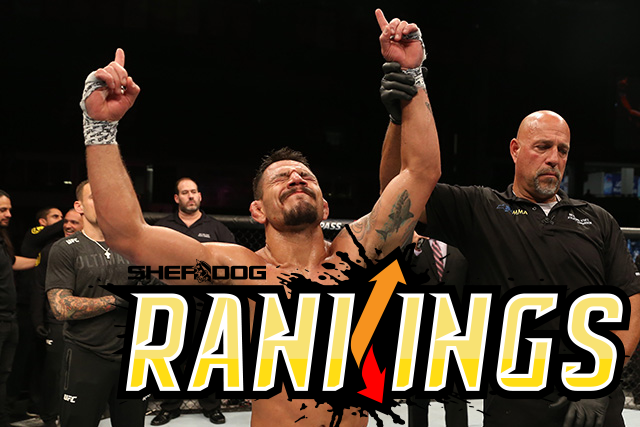 Rafael dos Anjos is no gatekeeper for the welterweight division.

The 34-year-old Brazilian gave Kevin Lee a rude welcome to 170 pounds in the UFC Fight Night 152 headliner, winning via fourth-round submission to halt a two-fight losing streak. With the win, dos Anjos improves to 4-2 at welterweight, but he doesn’t gain any ground for besting a lightweight making his divisional debut. Instead, dos Anjos remains our No. 4 ranked welterweight, while Lee stays ninth at 155 pounds – at least for now.

Elsewhere, Felicia Spencer announced her presence as a female featherweight contender with a first-round submission of fellow former Invicta titlist Megan Anderson. As a result of that victory, Spencer switches places with her Australian foe, moving from seventh to sixth at 145 pounds. In other UFC Rochester action, Ian Heinisch joins the middleweight bubble by virtue of his win over Antonio Carlos Jr., and Aspen Ladd stands pat at No. 5 with a second victory over Sijara Eubanks.