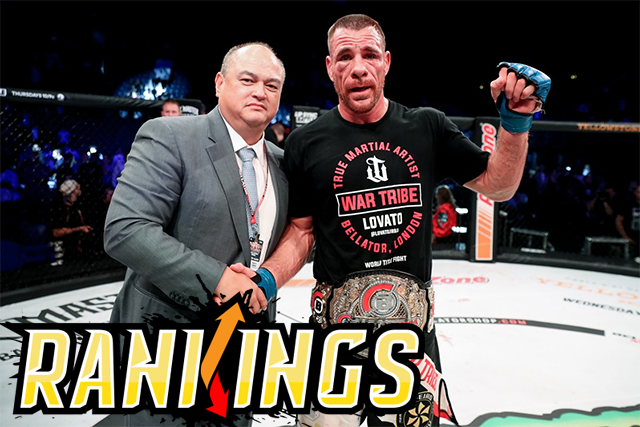 Dazn is the exclusive streaming partner of Bellator MMA. You can sign up here.

Rafael Lovato Jr. edged Gegard Mousasi in a hard-fought majority decision in the Bellator London headliner this past Saturday, claiming the 185-pound belt and improving his professional mark to 10-0. Thanks to the most significant victory of his career to date, the jiu-jitsu ace vaults from the bubble and into our middleweight Top 10 at No. 7. Mousasi, who saw an eight-fight winning streak dating back to his UFC tenure come to an end, falls one spot to eighth. Don’t be surprised if these two square off again.

Elsewhere, Chan Sung Jung would have already been a fixture in the featherweight poll were it not for Yair Rodriguez’s Hail Mary knockout with one second remaining in their UFC Denver headlining bout this past November. At UFC Fight Night 154 in Greenville, S.C., “The Korean Zombie” left nothing to chance, as he walloped the No. 6 featherweight, Renato Carneiro, in just 58 seconds to claim the No. 9 spot at 145 pounds – just below Rodriguez. “Moicano,” on the strength of wins over Cub Swanson, Jeremy Stephens and Calvin Kattar, hangs on at 10th despite a two-bout skid.

Meanwhile, Andrea Lee’s three-fight winning streak has her making moves at women’s flyweight, as she enters the rankings at 10th after outpointing Montana De La Rosa at UFC Greenville. Molly McCann takes former KSW champ Ariane Lipski’s spot on the bubble by virtue of a head-to-head win over “The Violence Queen” on the same card.