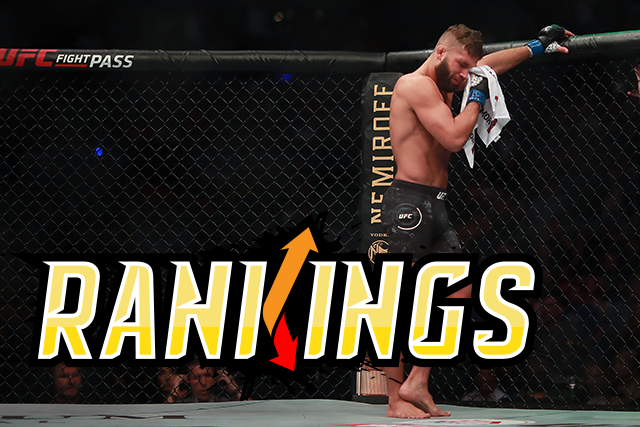 The UFC Fight Night 159 headliner between Yair Rodriguez and Jeremy Stephens had all the makings of an action-packed featherweight duel, but it wasn’t meant to be. Instead, an accidental eye poke from Rodriguez 15 seconds into the bout resulted in a disappointing no contest. Rather than getting to build upon his highlight-reel knockout of Chan Sung Jung nearly a year ago, “El Pantera” stands pat at No. 8 in our featherweight rankings. Considering the disappointing nature of the bout, Rodriguez will likely want to return to action as soon as possible. Whether that’s in an immediate rematch with Stephens remains to be seen.

Elsewhere, Carla Esparza maintained her hold on the No. 8 position at 115 pounds with a hard-fought majority decision triumph over Alexa Grasso in the UFC Mexico City co-headliner. Thanks to a furious finish in the final stanza, Grasso’s stock doesn’t fall far, and she remains on the strawweight bubble. It was more of the status quo earlier on the card as well, as Sergio Pettis (No. 5 at flyweight) and Irene Aldana (bubble at women’s bantamweight) cruised to decisions against relatively unheralded opponents in Tyson Nam and Vanessa Melo, respectively. No rankings movement was necessary in either case.