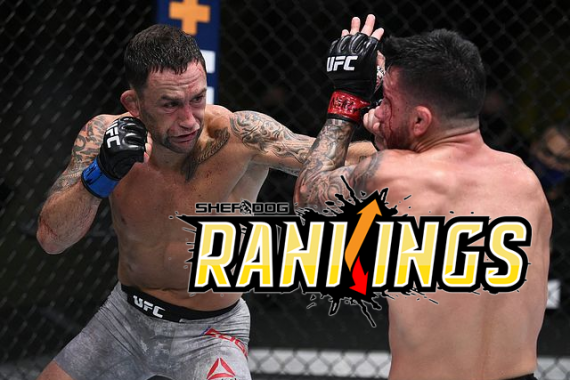 
Fresh faces dominated the weekend that was in mixed martial arts.

At Bellator 244, Vadim Nemkov ushered in a new era in the promotion’s light heavyweight division with a head-kick knockout of Ryan Bader in Friday’s headliner at Mohegan Sun Arena in Uncasville, Connecticut. While some might surely want the newly-crowned 205-pound champion — perhaps one of the sport’s most underrrated talents — to rise even more, Nemkov moves just one spot, from 10th to ninth, in Sherdog.com's latest divisional rankings update.

Though hardly a fresh face in terms of either tenure or name value, Frankie Edgar is nonetheless a new contender in the Ultimate Fighting Championship’s bantamweight division. The former lightweight champ and featherweight title challenger made an impact in his 135-pound debut at UFC on ESPN 15, where he captured a closely-contested split decision over Pedro Munhoz in Saturday’s main event at the UFC Apex in Las Vegas. As a result, Edgar takes his foe’s previous No. 6 ranking at bantamweight, while Munhoz falls one spot to seventh.