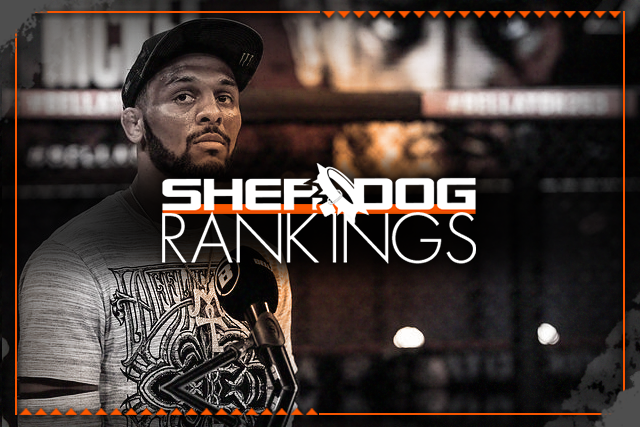 
A.J. McKee sent a message to the rest of the division in the semifinals of the Bellator featherweight grand prix.

By submitting former bantamweight king and NCAA national champion Darrion Caldwell with a neck crank in the opening round of their Bellator 253 headlining bout, McKee punched his ticket to the finals of the bracket, where we can only hope a showdown with Patricio Freire awaits (Freire must first get by Emmanuel Sanchez in the other semifinal). With a sparkling 17-0 record and an increasingly difficult level of competition, the 25-year-old “Mercenary” jumps from 15th to 12th in our latest 145-pound rankings. With another victory, Antonio McKee’s baby boy could be primed for a leap into the Top 10.

Elsewhere, all it took for Kayla Harrison to enter Sherdog’s rankings was a change in weight class. By thrashing Courtney King in her featherweight debut at Invicta FC 43, the two-time Olympic gold medalist joins the featherweight poll at No. 15. It’s as much an indictment of the strength of schedule of the previous No. 15, Cindy Dandois, as it is an acknowledgement of Harrison’s victory. However, if the defending Professional Fighters League 155-pound champ sticks around at featherweight, it isn’t difficult to imagine her climbing higher in the months to come.

Elsewhere, Katlyn Chookagian re-established herself as one of the flyweight division’s toughest gatekeepers when she halted the ascent of former strawweight contender Cynthia Calvillo in a featured clash at UFC 255. Though Chookagian is far from another title shot as long as Valentina Shevchenko is champ, “Blonde Fighter” jumps from eighth to sixth on the strength of her latest victory. Brandon Moreno, meanwhile, will have to wait another month to make a big leap in the male flyweight division. He stays put at No. 6 following a first-round stoppage of No. 11 Brandon Royval at UFC 255, but a showdown with Deiveison Figueiredo at UFC 256 awaits.