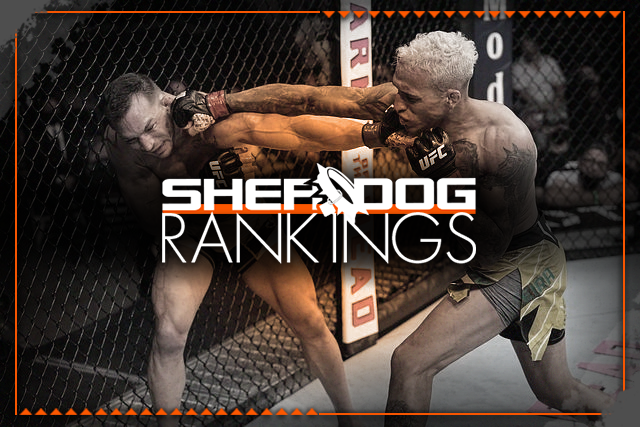 
This is Charles Oliveira’s moment.

It took him 28 fights to get there, but “Do Bronx” is now a UFC champion in arguably the sport’s most difficult division. Oliveira claimed the vacant lightweight crown with a second-round technical knockout victory against former Bellator king Michael Chandler in the UFC 262 main event at the Toyota Center in Houston on Saturday night.

Oliveira’s ninth consecutive victory put the Brazilian atop the promotion’s all-time list for most finishes – 17, for those keeping score -- but he hasn’t quite ascended to the top spot in Sherdog’s 155-pound divisional rankings. After besting Chandler, the Chute Boxe Diego Lima standout climbs from fourth to third in our latest poll. The recently-retired Khabib Nurmagomedov, whose eligibility hasn’t expired, remains No. 1, while the second-ranked Dustin Poirier could set up a date with Oliveira if he bests Conor McGregor in their trilogy bout at UFC 264 on July 10.

In other noteworthy lightweight action at UFC 262, Beneil Dariush sent Tony Ferguson to his third straight defeat with a clear-cut unanimous decision in the evening’s co-headliner. Dariush, who has won seven straight outings, jumps from 10th to seventh, while the slumping “El Cucuy” tumbles from fifth to ninth.

« Previous Dana White on Jon Jones: ‘He Can Fight This Summer, Or He Can Never Fight Again’ Next Opinion: The Chaos of MMA Fame and Fortune »