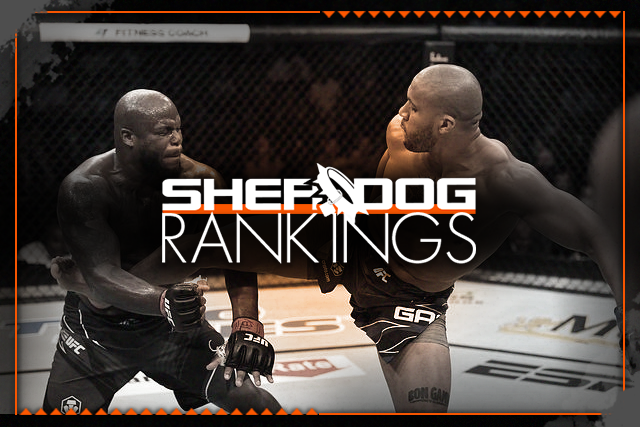 The Frenchman claimed the interim heavyweight crown in dominant fashion, scoring a third-round technical knockout victory against hometown favorite Derrick Lewis in Saturday’s headliner at the Toyota Center in Houston. The nearly unscathed Gane can now look ahead to a title unification bout against former training partner and countryman Francis Ngannou in the near future. In the present, “Bon Gamin” rises to No. 3 in our latest divisional rankings.

Elsewhere, former UFC and WEC featherweight king Jose Aldo earned his second consecutive victory at 135 pounds in a masterful three-round verdict over Pedro Munhoz in the UFC 265 co-main event to move back into the bantamweight Top 10, while Vicente Luque’s fourth consecutive victory came at the expense of Michael Chiesa, and allows “The Silent Assassin” to claim a No. 8 ranking at 170 pounds.

In weekly housekeeping, it’s the end of an era in the atomweight division, as top-ranked Seo Hee Ham exits the rankings on account of having not fought since December 2019. It’s unlikely we see “Hamderlei Silva” back in the poll either, because she’ll be fighting at 115 pounds under the One Championship banner for the foreseeable future. Additionally, former title challenger Frankie Edgar exits the featherweight rankings, with his last 145-pound appearance coming in a technical knockout loss to Chan Sung Jung at UFC Fight Night 165. “The Answer” remains ranked at bantamweight, however.