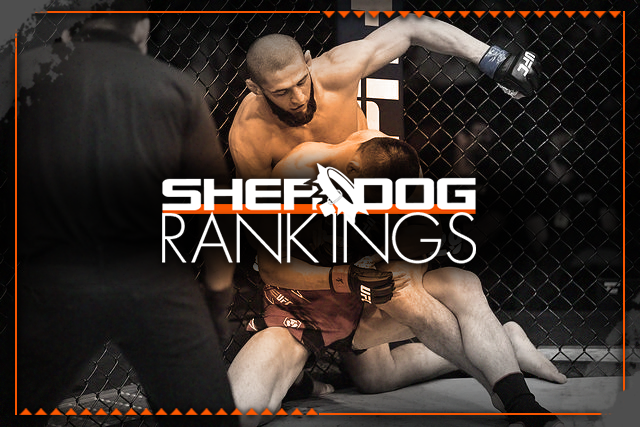 
If you thought an extended layoff and a bout with COVID-19 would be enough to slow the momentum of Khamzat Chimaev, think again.

The All Stars Training Center representative tore through Jingliang Li, winning via rear-naked choke 3:16 into the opening stanza of their welterweight bout at UFC 267 on Saturday. Facing his most accomplished foe to date, Chimaev made “The Leech” look like another journeyman opponent on his way to his fourth straight UFC triumph. By taking out the No. 14 welterweight, Chimaev makes his debut in Sherdog’s divisional rankings, a move that seems like a long time coming. Joining him in the welterweight poll is Ray Cooper III, who became a two-time PFL champion by vanquishing Magomed Magomedkerimov in the promotion’s welterweight 2021 final.

Elsewhere, Islam Makhachev made a significant move at lightweight, as he submitted Dan Hooker with a kimura in the opening round of their lightweight clash. The Khabib Nurmagomedov protégé has won nine straight fights and ascends to No. 6 at 155 pounds. That wasn’t the only significant action at lightweight, as Nurmagomedov, Patricio Freire and Kevin Lee all reached their inactivity thresholds, clearing the way for a trio of newcomers in the poll: Brad Riddell, Rafael Fiziev and Arman Tsarukyan.