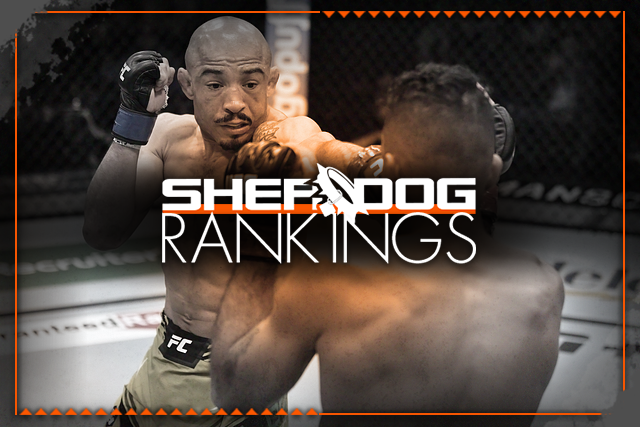 
Jose Aldo may be in the twilight of his MMA career, but he remains a serious contender in the Ultimate Fighting Championship’s bantamweight division.

The Nova Uniao stalwart secured his third consecutive triumph in the UFC on ESPN 31 headliner, taking a five-round verdict against Rob Font at the UFC Apex in Las Vegas on Saturday night. The man regarded by some as the greatest featherweight of all time is making a run toward a second title shot at 135 pounds, and with his latest effort, he climbs to No. 5 in Sherdog’s latest divisional rankings.

Aldo wasn’t the only bantamweight making serious moves over the weekend. Sergio Pettis pulled off a near-miraculous finish of Kyoji Horiguchi, scoring a spinning backfist knockout to retain his bantamweight crown in the Bellator 272 main event on Friday night. Had the fight gone to the scorecards, the outlook wouldn’t have been nearly as bright for Pettis, who debuts in the 135-pound poll at No. 10.

Elsewhere, lightweight contender Rafael Fiziev won his fifth consecutive Octagon appearance, vanquishing fellow striking coach Brad Riddell with a spinning wheel kick in the UFC on ESPN 31 co-main event. That elevates the Tiger Muay Thai member to No. 11 in the latest 155-pound poll. Finally, Sarah Kaufman makes her debut in the female featherweight rankings on the strength of a first-round TKO of previously 11th-ranked Jessy Miele on Nov. 20. Kaufman takes Miele’s spot at No. 11.