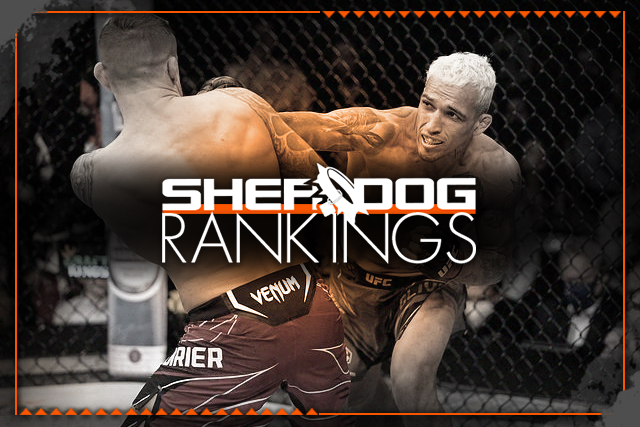 
As far as year-end pay-per-view events go, UFC 269 was one for the record books.

In the evening’s headliner, Charles Oliveira took his rightful place atop Sherdog.com's lightweight poll thanks to a third-round submission of Dustin Poirier, who was previously ranked No. 1 despite not having a championship belt in his possession. Meanwhile, Julianna Pena rockets to the top spot at women’s bantamweight after authoring an all-time upset against Amanda Nunes in this past Saturday’s co-main event.

While Oliveira and Pena will receive the lion’s share of the attention from UFC 269, and rightfully so, we’d like to welcome former bantamweight king Dominick Cruz back to the rankings following an entertaining three-round verdict over Pedro Munhoz. “The Dominator” checks in at No. 11 in this week’s 135-pound rankings, and he figures to have no shortage of suitors awaiting his next Octagon appearance.

Elsewhere, Andre Muniz secured his third straight armbar victory in UFC competition when he tapped Eryk Anders with the maneuver. With eight consecutive triumphs under his belt overall, Muniz supplants the slumping Kelvin Gastelum on the middleweight bubble.