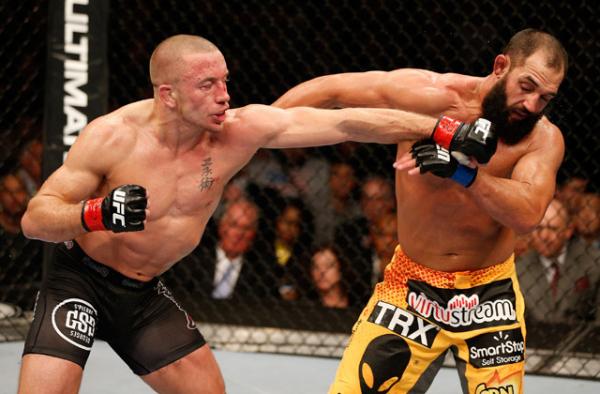 
During his lengthy tenure atop the UFC’s welterweight division, Georges St. Pierre has been nothing if not consistent. His 12th straight victory, however, provided more questions than answers. While a split-decision triumph over Johny Hendricks in the UFC 167 headliner allowed St. Pierre to maintain his lofty perch at 170 pounds, many believe “Bigg Rigg” did more than enough to earn the nod from the judges.

In most cases, such a contentious ruling would lead to an immediate rematch. Not this time. Shortly after his narrow escape, St. Pierre announced that he needed to “step away for a little bit.” Only time will tell if the champion’s leave of absence becomes permanent.

Elsewhere, Robbie Lawler continued his resurgence by knocking off the highly regarded Rory MacDonald via split decision in another pivotal welterweight clash at UFC 167. The hard-hitting American Top Team product could be on the verge of serious title contention.

Meanwhile, Bellator MMA’s pay-per-view hopes might have been dashed, but the promotion’s Nov. 2 card nonetheless featured a couple of bouts with major rankings implications: Eddie Alvarez regained the lightweight crown he lost two years ago in a rousing rematch with Michael Chandler, and Pat Curran’s time atop the Bellator featherweight division came to an end thanks to a grinding effort by Daniel Straus.

The potential for more upheaval is great as 2013 draws to a close, with four UFC cards -- including the highly anticipated rematch between Chris Weidman and Anderson Silva -- helping to close out the calendar.