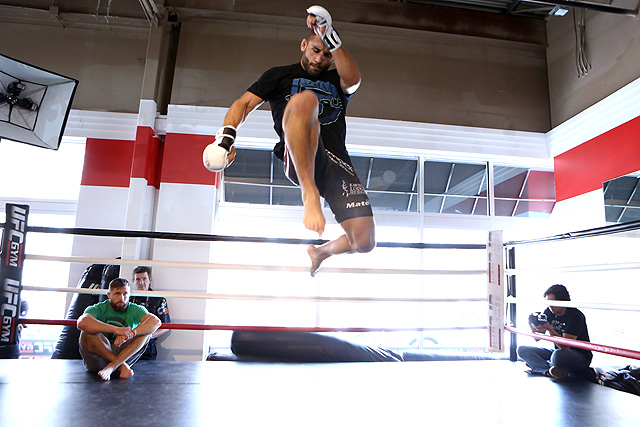 While the MMA world waits for Jose Aldo and Conor McGregor to tangle in July, Chad Mendes is busy shoring up his spot as No. 2 in the featherweight division.

Mendes went up against Ricardo Lamas in the high-stakes main event of UFC Fight Night in Fairfax, Va., on April 4, and the result was another impressive display of striking from the former college wrestling stud. It took less than three minutes for Mendes to punch out Lamas, raising the Team Alpha Male representative’s career record to an impressive 17-2. The only blemishes on Mendes’ record come from his two unsuccessful attempts to take Aldo’s title, and after another strong showing against a top-10 opponent, Mendes believes he is back in title contention.

Whether Mendes gets a third shot at Aldo will depend on what happens at UFC 189, as well as the result of teammate Urijah Faber’s May meeting with Frankie Edgar. For now, Mendes remains slotted second at 145 pounds, while Lamas stays put in the No. 4 position.

The UFC Fight Night “Mendes vs. Lamas” card also featured a pair of controversial decisions. In the co-main event, Al Iaquinta took a widely criticized split nod over Jorge Masvidal; both men remain on the list of lightweight contenders. Meanwhile, Liz Carmouche’s contentious three-round win over Lauren Murphy impacted the women’s bantamweight rankings, as former No. 8 Murphy falls to the list of contenders, while Carmouche enters at No. 10.

For the first time since his days as a Shooto contender, Marcos Galvao has rejoined the bantamweight top 10. The newly crowned Bellator MMA champion enters as No. 10 following a first-round kneebar submission of Joe Warren at Bellator 135.

In other activity: Dustin Poirier’s move to lightweight leaves an opening for former Bellator ace Pat Curran to join the list of 145-pound contenders; Kelvin Gastelum’s shift to middleweight makes room for Thiago Alves on the 170-pound bubble list; and welterweight contender Hector Lombard has been removed from the rankings due to his one-year suspension from the Nevada Athletic Commission. World Series of Fighting champ Rousimar Palhares fills the vacant spot as No. 10 welterweight.

Lastly, Bellator champion Vitaly Minakov has been removed from the heavyweight rankings after one year of inactivity and with no upcoming fight scheduled. Minakov’s exit makes room for Alistair Overeem at No. 10, and Marcin Tybura on the list of contenders.