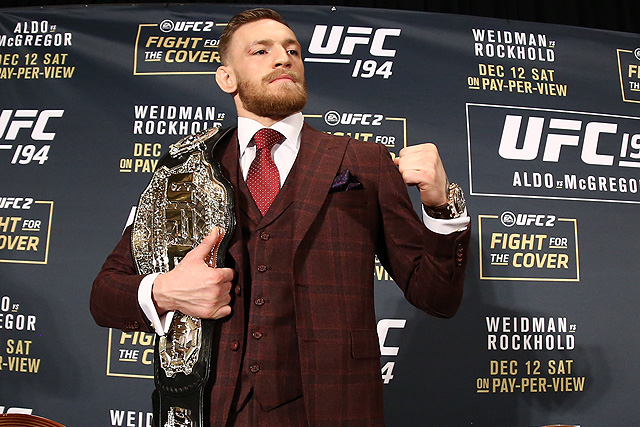 It’s safe to say that a few divisions were shaken up during one of the biggest weekends ever produced by the Ultimate Fighting Championship.

No top 10 was more rattled than that of the featherweight division, which crowned not only a new king but also a new No. 1 contender. At UFC 194, Conor McGregor ended months of hype and trash talk with a 13-second, one-punch knockout of Jose Aldo, who had ruled at 145 pounds in the UFC and WEC since 2009. McGregor begins his reign as undisputed champion on a 15-fight winning streak which stretches back to November 2010.

Immediately after his win, McGregor speculated that he could move up to challenge for the lightweight title; otherwise, the Irishman will have to deal with Frankie Edgar, who solidified his place as top challenger one night prior when he starched Chad Mendes at “The Ultimate Fighter 22” Finale. Meanwhile, rising star Max Holloway -- who is on a quest for a rematch with McGregor -- cracked the featherweight top five thanks to his solid performance in a unanimous decision win over Jeremy Stephens.

UFC 194 also saw Luke Rockhold ascend to the top of the middleweight division, as the former Strikeforce champ became the first man to defeat Chris Weidman. Brutal ground-and-pound left Weidman bloodied and led to a fourth-round stoppage for Rockhold, his fifth straight win since being knocked out by Vitor Belfort in May 2013. Although Rockhold would love to get revenge on Belfort, he may first have to rematch Weidman or defend against Yoel Romero, who eked out a decision against Ronaldo Souza in a likely No. 1 contender bout.

Surging lightweight Tony Ferguson continues to collect wins and climb the 155-pound ladder. “El Cucuy” threw down with Edson Barboza on Dec. 11 and came away with a second-round submission, not to mention accolades for “Fight of the Night” and “Performance of the Night.” Ferguson rises two spots to No. 5 in this update, bumping Bellator titlist Will Brooks.

In other activity: Demian Maia moves up two places to No. 6 in the welterweight top 10 after a dominant win over Gunnar Nelson, who is replaced on the contender list by Ryan LaFlare; bantamweight No. 4 Urijah Faber and No. 5 Aljamain Sterling held their spots with victories on the week; unbeaten strawweight Tecia Torres climbs two to the No. 8 position; and Bellator heavyweight champ Vitaly Minakov keeps his No. 10 ranking with another effortless win in his native Russia.