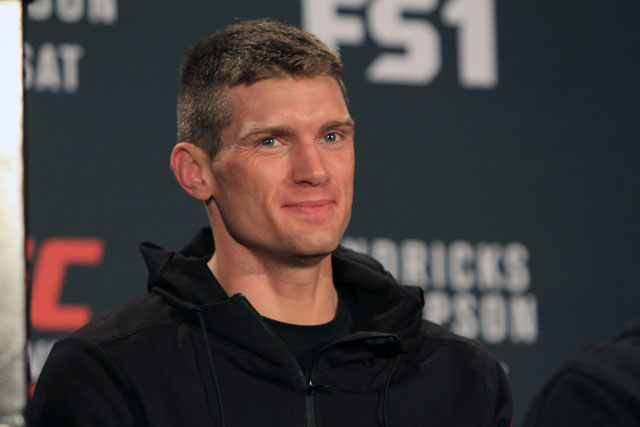 Previously unranked Stephen Thompson joins the welterweight top 10 in this edition of Sherdog.com’s official rankings, and the entrance of “Wonderboy” has a major impact.

Thompson, who struck down former champion Johny Hendricks on Feb. 6 in their UFC Fight Night main event, joins the 170-pound elite in the No. 4 position with this update. Formerly second-ranked Hendricks tumbles three places to No. 5, which bumps up Rory MacDonald and Tyron Woodley * into the two and three spots, respectively. Meanwhile, the previous No. 10 becomes the odd man out, as Thompson’s rise bumps Neil Magny back to the list of contenders.

Elsewhere, Joseph Benavidez remains the best flyweight in the world not named Demetrious Johnson. The “Joe-Jitsu” stylist held on to his No. 2 ranking at 125 pounds by outpointing former Bellator champ Zach Makovsky with high-volume striking and counter-wrestling. Makovsky’s loss drops him from No. 7 to 10.

In other action: Ovince St. Preux keeps his place as the No. 8 light heavyweight after a grinding win against Rafael Cavalcante; hot prospect Justin Scoggins rejoins the list of flyweight contenders, replacing Ben Nguyen; and Roy Nelson takes the place of Jared Rosholt on the heavyweight bubble.

* - Sherdog’s rankings panel has voted to keep Woodley in the rankings despite his passing the one-year inactivity threshold. Although the fight was scratched, Woodley was healthy and made weight for his scheduled bout against Hendricks in October.