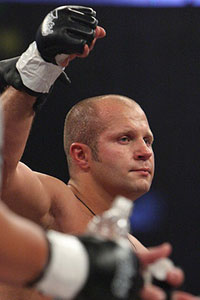 1. Fedor Emelianenko (28-1, 1 NC)
If there has been one criticism of MMA’s premier heavyweight, it’s that Emelianenko has not met the best of his contemporaries over the last three years. He responded with a 36-second thrashing of Tim Sylvia in July, and he will look to further prove his supremacy over the division on Jan. 24 when he takes on another former UFC heavyweight champion, Andrei Arlovski, in the Affliction “Day of Reckoning” headliner.

2. Andrei Arlovski (14-5)
This year offered Arlovski a great opportunity to rebuild himself, and he did so brilliantly. With his knockouts of Ben Rothwell and Roy Nelson, he has earned himself the biggest fight of his career -- a meeting with the sport’s finest heavyweight, Emelianenko, in the main event of Affliction’s sophomore effort on Jan. 24.

3. Josh Barnett (23-5)
Gilbert Yvel will be next for Barnett at Affliction “Day of Reckoning,” should the California State Athletic Commission choose to forgive the dirty Dutchman’s past indiscretions. The real prize for catch wrestling’s proudest proponent, provided Barnett wins, would be a showdown with the winner of the Emelianenko-Arlovski bout.

4. Frank Mir (12-3)
In a fight that he was almost universally counted out of, the former UFC champion turned in the best performance of his career, technically trumping Antonio Rodrigo Nogueira en route to becoming the first man to ever stop “Minotauro.” Now, sometime in 2009, Mir will have to duplicate his February win over Brock Lesnar to become the UFC’s undisputed heavyweight king.

5. Antonio Rodrigo Nogueira (31-5-1, 1 NC)
Nogueira, the early favorite in the UFC’s ad hoc heavyweight tournament, turned in a woeful performance against Mir, who completely took apart the former Pride heavyweight champion before finishing him off with punches in the second round. He’s still a top heavyweight, but Nogueira has a long way to go to erase memories of such a lopsided loss.

6. Brock Lesnar (3-1)
With the first legs of the UFC’s heavyweight tournament over, Lesnar will have the chance to make an enormous statement in just his fifth professional bout. He will take on Mir -- the man who handed him his first career loss at UFC 81 -- in a UFC heavyweight title unification match.

7. Randy Couture (16-9)
Couture’s post-retirement run came to a screeching halt in his first post-resignation bout, as he returned to the Octagon for the first time in 15 months and was knocked out by Lesnar in the second round at UFC 91. The defeat left questions about what “The Natural” has left in the tank.

8. Tim Sylvia (24-5)
There’s no clear next step for Sylvia. The two-time UFC champion’s looking to drum up interest from Japanese promoters, as well as chasing a potentially lamentable bout with elder statesman Ken Shamrock, who would hardly offer Sylvia real competition.

9. Ben Rothwell (29-6)
A bout with Pedro Rizzo at Affliction’s Jan. 24 show did not materialize. Instead, Rothwell got in a tidy tune-up bout, bashing an overmatched Chris Guillen at Adrenaline MMA’s second event on Dec. 11.

10. Alistair Overeem (29-11-0, 1 NC)
Overeem has been experiencing a major resurgence in the MMA world, and the Dutchman turned in one of the most brilliant performances of his career in the kickboxing ring on New Year’s Eve. He completely destroyed K-1 World Grand Prix runner-up and resident Bad Boy Badr Hari in less than a round, bringing the hype surrounding the “Demolition Man” to critical mass.