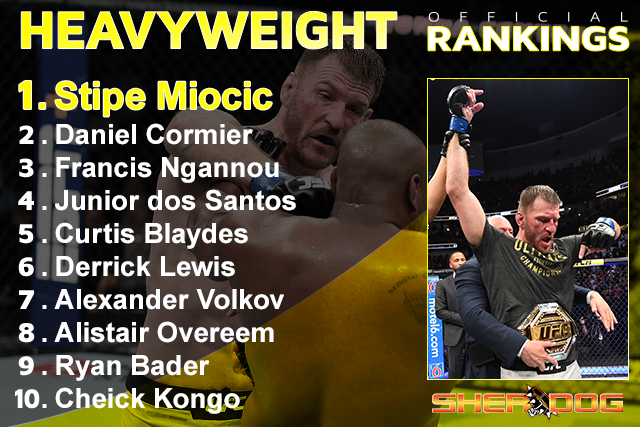 Ngannou has the type of tantalizing power that can put anyone to sleep in a matter of seconds, and he showcased it once again at UFC on ESPN 3, where he dispatched Junior dos Santos in a little more than one minute in the evening’s headliner in Minneapolis. “The Predator” has now authored three consecutive first-round finishes, putting a disappointing two-fight skid in the first half of 2018 squarely in his rearview mirror. That run could put him in line for another heavyweight title shot, although he may be forced to wait until Stipe Miocic and Daniel Cormier complete their trilogy sometime next year.

Dos Santos’ mini-resurgence came to a screeching halt in the UFC on ESPN 3 headliner, where he was soundly defeated by Francis Ngannou via first-round technical knockout in Minneapolis. Prior to that, “Cigano” had climbed back into contention with successive triumphs over Blagoy Ivanov, Tai Tuivasa and Derrick Lewis. Now 35 years old, it remains a question if wear and tear will eventually begin to catch up with the Brazilian veteran, but for now he’s still a Top 5 heavyweight talent. He was supposed to return to the Octagon against Alexander Volkov in Moscow on Nov. 9, but a bacterial infection forced him to withdraw from that contest.

Sporting an improved physique, Lewis battled through three tough rounds to take a unanimous verdict against the durable Blagoy Ivanov at UFC 244. “The Black Beast” landed his share of heavy shots and was able to escape a few precarious positions on the ground to earn his 13th Octagon triumph at heavyweight. It was a welcome return to the win column for the Houston native, who had been finished in back-to-back outings by Junior dos Santos and Daniel Cormier.

Originally scheduled to face Alexander Volkov at UFC St. Petersburg, Overeem adjusted to an opponent change with no issue, as he stopped Alexey Oleynik via technical knockout 4:45 into the opening stanza of the evening’s headliner. “The Reem” gradually softened his foe with powerful knees, the last of which dropped Oleynik to the canvas. From there, Overeem unloaded with powerful ground-and-pound to earn his second consecutive win. Overeem was expected to square off against the surging Walt Harris in the UFC on ESPN 7 headliner in Washington, D.C, but the tragic disappearance of Harris’ stepdaughter forced “The Big Ticket” to withdraw from the contest. Instead, Overeem will square off against Suriname native Jairzinho Rozenstruik.