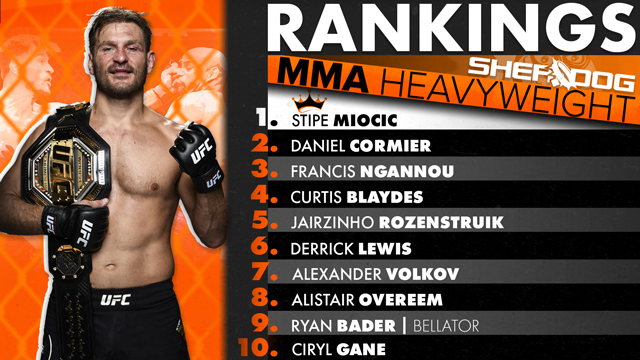 Blaydes set a heavyweight record with 14 takedowns in a unanimous decision win over Alexander Volkov in the UFC on ESPN 11 main event on June 20. While the Elevation Fight Team product fatigued in the championship rounds, he still had enough left in the tank to earn his fourth consecutive UFC triumph. Blaydes was supposed return to action against Derrick Lewis in the UFC on ESPN 18 headliner before a positive COVID-19 test for Blaydes scrapped the bout one day prior to the event. Now, Blaydes and Lewis will square off at UFC Fight Night 185 on Feb. 20.

Rozenstruik waited for an opening against Junior dos Santos at UFC 252 and once it arrived, “Bigi Boy” capitalized, flooring his Brazilian foe with a two-punch combination before clinching victory with a flurry of follow-up blows for a stoppage victory at the 3:47 mark of Round 2. Rozenstruik was able to bounce back from a 20-second KO loss to top contender Ngannou in May and added “Cigano” to a list of knockout victims that also includes Alistair Overeem and Andrei Arlovski. Rozenstruik will return to action against Ciryl Gane at UFC Fight Night 186 on Feb. 27.

Lewis took a risky approach against Alexey Oleynik in the UFC Fight Night 174 main event, as he elected to grapple with his veteran opponent for a round at the UFC Apex in Las Vegas. After nearly being submitted, Lewis quit messing around and stopped the Russian with punches 21 seconds into the second frame. Lewis has won three straight and is the UFC’s all-time heavyweight knockout leader. “The Black Beast” had a date with takedown machine Curtis Blaydes at UFC on ESPN 18 before a positive COVID-19 test for Blaydes scrapped the proposed headliner. The bout has been rebooked for UFC Fight Night 185 on Feb. 20.

Overeem has managed to extend his career thanks to a more measured approach that usually protects his declining chin. However, his tactics simply didn’t work at UFC Fight Night 184, where he was bloodied and battered by Alexander Volkov in a second-round TKO defeat on Feb. 6. Coming in, the Dutchman had won four of his previous five Octagon appearances and still entertained hopes of another UFC title run. Now, those dreams appear to be extinguished for good.

Gane earned a signature triumph at UFC 256, when he defeated former heavyweight champ Junior dos Santos via technical knockout 2:34 into Round 2 of their featured encounter at the UFC Apex in Las Vegas on Dec. 12. That makes four UFC triumphs — and three finishes — for the 30-year-old Frenchman, who is rapidly trending upward in the promotion’s big-man division. He’ll face another stern test when he meets Jairzinho Rozenstruik at UFC Fight Night 186 on Feb. 27.