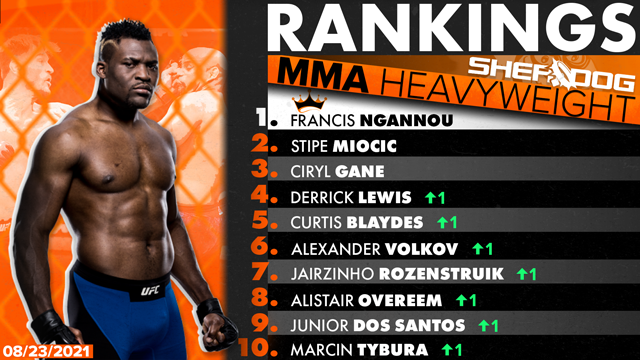 Lewis simply had no answer for Ciryl Gane in the UFC 265 headliner, as he fell to the well-rounded Frenchman via third-round technical knockout despite having a supportive hometown Houston throng behind him. Lewis sees a four-bout winning streak snapped, and he falls to 0-2 in heavyweight title bouts. Despite his shortcomings, “The Black Beast” remains one of the promotion’s most popular and entertaining fighters, and he will get another headlining assignment when he meets Chris Daukaus at UFC Fight Night on Dec. 18.

Volkov utilized stout takedown defense and accurate punching combinations to take a unanimous verdict over Marcin Tybura in a slow-paced heavyweight affair at UFC 267 in Abu Dhabi. Volkov has won three of his last four promotional outings and though he has struggled against the likes of Ciryl Gane and Curtis Blaydes, the former Bellator champion remains a good litmus test for big men looking to climb the divisional ladder in the UFC.

Overeem has managed to extend his career thanks to a more measured approach that usually protects his declining chin. However, his tactics simply didn’t work at UFC Fight Night 184, where he was bloodied and battered by Alexander Volkov in a second-round TKO defeat on Feb. 6. Coming in, the Dutchman had won four of his previous five Octagon appearances and still entertained hopes of another UFC title run. Now, those dreams appear to be extinguished for good — especially considering that Overeem was released from his UFC contract in March. Overeem was slated to return to the kickboxing realm after signing with Glory for a title bout against Rico Verhoeven on Oct. 23, but “The Reem” was forced to withdraw from that contest due to injury.

Tybura’s improbable resurgence came to an end at UFC 267, as he dropped a unanimous decision to Alexander Volkov at Etihad Arena in Abu Dhabi on Oct. 30. The former M-1 Global champion struggled to land takedowns against a considerably larger opponent, and his five-bout winning streak was snapped in defeat. Tybura’s recent track record should keep him in line for another significant matchup at heavyweight.