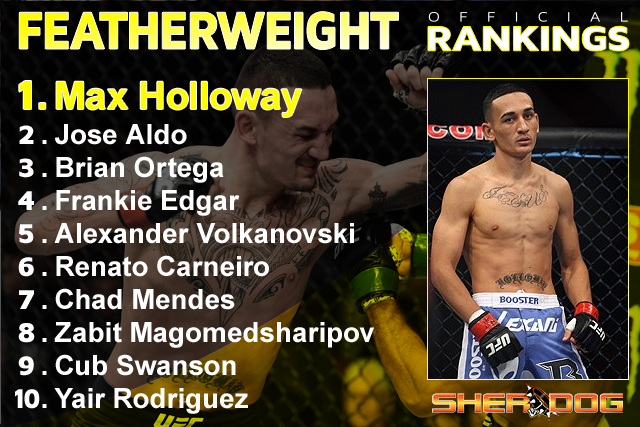 After a rough year saw Holloway suffer through multiple fight cancellations, “Blessed” closed out 2018 with a bang at UFC 231. The reigning featherweight champion busted up the previously undefeated Brian Ortega for four rounds, ultimately forcing a doctor stoppage before the fifth round could commence. The Hawaiian fighter will attempt to become a two-division champion in his next outing, when he faces Dustin Poirier for the interim lightweight belt at UFC 236 in Atlanta on April 13.

Aldo may no longer be champion, but he once again demonstrated why he is regarded by many as the greatest featherweight of all-time with an impressive stoppage of rising contender Renato Carneiro at UFC Fortaleza. Once the former UFC and WEC titlist had Carneiro hurt, he attacked with a purpose battering “Moicano” with strikes to the head and body for a technical knockout victory 44 seconds into round two. Aldo’s 2019 farewell tour will continue against rising contender Alexander Volkanovski at UFC 237 in Rio de Janeiro on May 11 provided that a knee infection doesn’t force him out of the contest.

Ortega was plenty game, but he was ultimately overwhelmed by the cumulative damage inflicted by featherweight champion Max Holloway in the UFC 231 headliner. “T-City” was ruled unable to come out before the fifth round and with that, his undefeated record was no more. Although Ortega hit Holloway with some solid shots in the third frame, the contest was dominated by the Hawaiian’s relentless offense. Ortega predicted multiple meetings with Holloway prior to the fight, but he likely has work to do before earning a rematch.

It was not quite as dominant as the first time around, but Edgar nonetheless appears to have Cub Swanson’s number. Shaking off concerns about a quick turnaround following a devastating knockout loss to Brian Ortega at UFC 222, “The Answer” was back to his usual form, as he pressured and outpointed Swanson for three rounds at UFC Fight Night 128 in Atlantic City, New Jersey. Edgar was supposed to welcome Chan Sung Jung back to the Octagon at UFC Fight Night 139, but a biceps injury forced the ex-lightweight king to pull out of the matchup.

Volkanovski had a breakout performance at UFC 232, weathering an early knockdown to earn a second-round technical knockout of former title challenger Chad Mendes. In addition to a relentless offensive attack, Alexander “The Great” demonstrated the ability to return to his feet quickly upon being taken down, a useful skill against a wrestling-minded foe. Volkanovski has now won six straight in the UFC, including four in a row at featherweight. The Australian has a chance to stake his claim to the No. 1 contender’s spot with a win over Jose Aldo at UFC 237 on May 11.

Carneiro started well enough against Jose Aldo at UFC Fortaleza, but when the former champion turned up the heat in the second stanza, “Moicano” wilted under the pressure. There is no shame in losing to an all-time great, however, and the 29-year-old Carneiro, who already owns notable wins over Cub Swanson and Jeremy Stephens, still has time to climb back into contention at 145 pounds.

Mendes flashed his heavy hands early against Alexander Volkanovski at UFC 232, but ultimately wilted under the Australian’s relentless offensive pressure in losing via second-round technical knockout. While the former featherweight title challenger looked sharp in stopping Myles Jury following a two-year USADA suspension, “Money” has lost three of his last four fights in the Octagon — all by KO or TKO.

Magomedsharipov passed his toughest test to date at UFC 235, as he relied on his rangy striking and wrestling to outpoint veteran gatekeeper Jeremy Stephens at the T-Mobile Arena in Las Vegas. The 28-year-old Dagestan native extended his UFC winning streak to five, the second-longest in the featherweight division behind only reigning champion Max Holloway. Expect another ranked opponent for Magomedsharipov’s next Octagon appearance.

The days of Swanson hovering near the top of the featherweight division may have finally reached their end. The World Extreme Cagefighting veteran dropped his third consecutive bout at UFC 227, falling to rising talent Renato Carneiro via first-round submission. Swanson, who owns four- and six-fight winning streaks during his promotional tenure, will attempt to rebound against Shane Burgos at UFC Ottawa on May 4.

Rodriguez was on the verge of losing his second consecutive bout at UFC Fight Night Denver until he landed the elbow heard ‘round the world with one second remaining in his headlining clash with Chan Sung Jung. Not only does “Pantera” have an all-time knockout on his resume, but he regains some of the luster he lost in a lopsided defeat to Frankie Edgar in May 2017. The 26-year-old Mexican improved to 7-1 in the Octagon with his win over “The Korean Zombie,” and should be in line for another high-profile booking down the road.