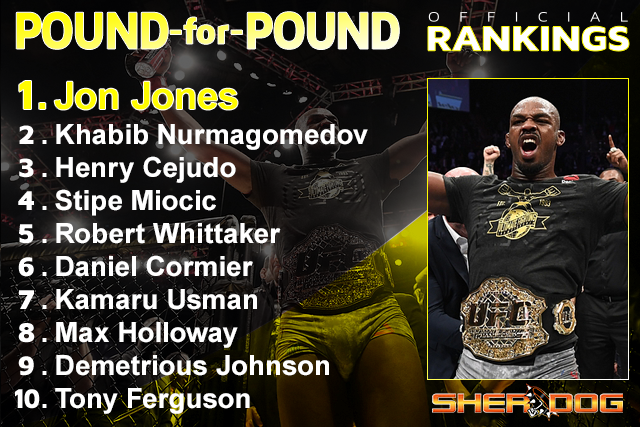 There’s death, taxes, and then there’s the dominance Khabib Nurmagomedov.

The Dagestani successfully defended his lightweight title in emphatic fashion at UFC 242, submitting Dustin Poirier with a rear-naked choke in the third-round of their headlining encounter in Abu Dhabi on Saturday. That makes 12 consecutive Octagon triumphs and 28 straight professional victories overall for “The Eagle,” who was never truly threatened by Poirier after dropping a round for the first time in his career against Conor McGregor at UFC 229 last October.

That performance allows Nurmagomedov to move past Henry Cejudo and into second place in our pound-for-pound rankings, and a win over Tony Ferguson could give him serious consideration for the No.1 spot ahead of Jon Jones in the future. Poirier, meanwhile, must endure the disappointment of a championship defeat that featured only a few fleeting moments of success. “The Diamond” sees a six-fight unbeaten streak come to an end and falls to the bubble list (making its own pound-for-pound debut) in our latest poll, while Ferguson takes his place at No. 10.

An emergency hernia surgery forced Whittaker to withdraw from his scheduled title defense against Kelvin Gastelum at UFC 234. Even more disappointing, that’s twice that “The Reaper” has been forced to pull out of headlining championship fights in his home country of Australia (An injury also forced him out of a proposed matchup with Luke Rockhold at UFC 221.) Whittaker has won nine bouts in a row but is still awaiting his first official belt defense, as his UFC 225 triumph over Yoel Romero was a non-title bout due to Romero missing weight. A title unification bout with interim champ Israel Adesanya will take place at UFC 243 on Oct. 5.

Even those who predicted victory for Usman couldn’t have imagined “The Nigerian Nightmare” being as dominant as he was against Tyron Woodley at UFC 235. Usman claimed the welterweight throne on the strength of five dominant rounds against Woodley, overwhelming his opponent with wrestling, clinch work and top control. In fact, Usman probably deserved more 10-8 scorecards than he received. Nonetheless, Usman has hardware for his trophy case and an ongoing 10-fight winning streak. After recovering from double-hernia surgery, Usman was expected to defend his belt against Colby Covington at UFC 244, but negotiations for the bout fell through and it’s currently unclear when the reigning champ will return to the Octagon.

Holloway remains the unquestioned king of the featherweight division. After a loss to Dustin Poirier in a bid for the interim lightweight crown this past April, “Blessed” returned to form at UFC 240, as he outstruck Frankie Edgar for the better part of 25 minutes in the evening’s main event at Rogers Place in Edmonton, Alberta, Canada. The gives the Hawaiian 16 featherweight wins and 17 overall in UFC competition, and at 27 years old, he could just be getting started. Holloway’s most likely next opponent, Alexander Volkanovski, was in attendance for the UFC 240 bout, setting the stage for an interesting matchup later in 2019.