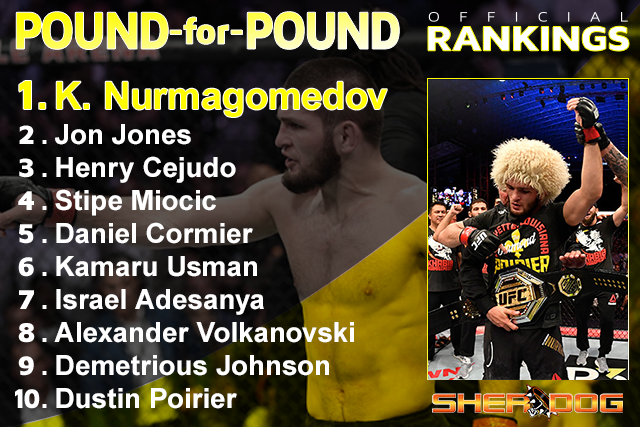 “The Nigerian Nightmare” notched his 12th consecutive welterweight triumph in the UFC 251 headliner, taking a clear-cut unanimous decision over fan favorite Jorge Masvidal in Abu Dhabi. That ties him for with pound-for-pound great GSP for the longest winning streak in UFC history at 170 pounds. Despite that mark, Usman hasn’t quite reached St. Pierre status in Sherdog.com's latest pound-for-pound rankings. The reigning welterweight king’s triumph over a short-notice foe, while impressive, wasn’t enough to lift him above his previous ranking of No. 6. With the two men ahead of him, Stipe Miocic and Daniel Cormier, on tap to fight next month, there could be room for advancement in the near future.

Elsewhere, Alexander Volkanovski improved to 2-0 in his championship rivalry with Max Holloway by earning a contentious split-decision triumph in the UFC 251 co-main event. Though the triumph was disputed by many observers, Volkanovki’s second consecutive triumph over a fellow pound-for-pound contender allows him to move up one spot, from eighth to ninth ahead of Demetrious Johnson, who awaits his next One Championship appearance. Holloway, despite losses in three of his last four outings, clings to his 14th ranking for the time being.

Nurmagomedov needed less than 15 minutes to dispatch Dustin Poirier at UFC 242, and he made it look astonishingly easy. “The Eagle” overwhelmed his opponent with takedowns and pressure from the outset of the bout, gradually wearing Poirier down until he secured the rear-naked choke submission at the 2:06 mark of Round 3. Nurmagomedov’s long-anticipated date with Tony Ferguson remains cursed, as their headlining bout at UFC 249 was scrapped after the Dagestani fighter was stranded in Russia due to travel restrictions designed to combat the coronavirus pandemic. Nurmagomedov is expected to face new interim king Justin Gaethje, though a date for that title unification bout remains unclear..