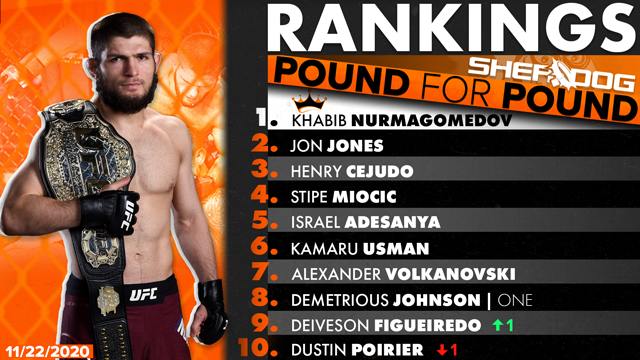 
Thanks to a superb finishing instinct, Deiveson Figueiredo might just be the star the UFC’s flyweight division needs.

The 32-year-old Brazilian made short work of Alex Perez in his first 125-pound title defense, submitting his opponent with a guillotine choke 1:57 into the opening frame of the UFC 255 headliner at the UFC Apex in Las Vegas on Saturday night. Figueiredo’s recent five-bout winning streak includes a pair of finishes of pound-for-pound contender Joseph Benavidez as well as two more victories over Top 10 flyweights in Perez and Alexandre Pantoja. That’s enough for “Daico” to surpass Dustin Poirier and assume the ninth position in Sherdog.com's latest pound-for-pound rankings. Figueiredo will get a chance to further bolster his resume when he makes a quick turnaround to face Brandon Moreno at UFC 256 on Dec. 12.

Maybe 30-0 won’t become a reality, but Nurmagomedov put about a perfect a stamp as one could on his mixed martial arts career with a second-round submission of Justin Gaethje in the UFC 254 headliner on Oct. 24. “The Eagle” withstood some heavy artillery from his opponent — including some powerful low kicks — while continuing to apply constant pressure. Eventually, Gaethje wilted on the canvas, as Nurmagomedov choked him unconscious at the 1:34 mark of Round 2. In the aftermath, Nurmagomedov announced his retirement, leaving behind a legacy that includes a 13-0 UFC mark and a record-tying four championship victories in the brutal lightweight division. However, Nurmagomedov’s belt has not been vacated, as the promotion appears convinced that “The Eagle” will compete once more.

If a lackluster showing against Yoel Romero at UFC 248 took some of the shine off Adesanya’s star, the City Kickboxing product restored all that was lost and then some with a dominant showing against the previously undefeated Paulo Costa at UFC 253. “The Last Stylebender” was rarely threatened as he befuddled his powerfully built opponent with crisp striking and precise movement, winning by technical knockout in the second stanza of their headlining encounter on Yas Island in Abu Dhabi on Sept. 26. Rather than a rematch with Robert Whittaker, Adesanya will turn his attention to two-division dominance with a showdown against reigning 205-pound king Jan Blachowicz at some point in 2021..

Figueiredo looks like a star in the making following his first title defense at UFC 255, where he dispatched Alex Perez with a guillotine just 1:57 into the opening round of their headlining encounter at the UFC Apex in Las Vegas on Nov. 21. Figueiredo has finished his last four opponents and is tied with ex-champ Demetrious Johnson for the most finishes in the history of the division at 125 pounds. The Brazilian champion already has his next assigment: a UFC 256 showdown with Brandon Moreno.

Coming off a disappointing loss to Khabib Nurmagomedov in a 155-pound title bout at UFC 242 last September, Poirier displayed his championship mettle against Dan Hooker in the UFC on ESPN 12 main event. “The Diamond” dropped the first two rounds to his Kiwi opponent before picking up the pace down the stretch to earn a thoroughly entertaining unanimous decision at the UFC Apex in Las Vegas. Poirier has won five of his last six Octagon appearances and remains a dangerous force at the top of the division. The American Top Team product a rematch will next get a high-profile shot at revenge in a rematch with Conor McGregor at UFC 257 on Jan. 23.