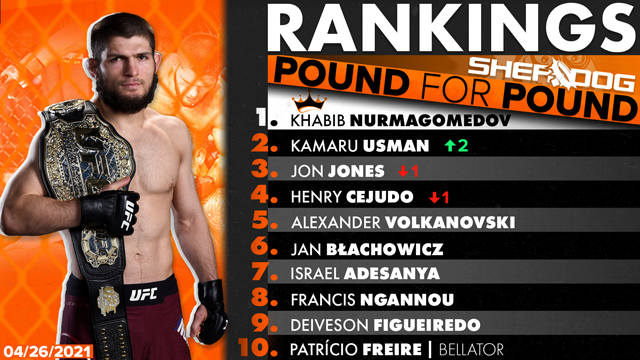 
It may seem like Kamaru Usman is a fast riser in Sherdog.com’s pound-for-pound rankings, but the truth is, his move toward the top of the poll has been a long and arduous process.

For the first half of his 14-bout UFC winning streak, Usman was a decision machine whom marquee opponents avoided like the plague. Keep winning, however, and the high-profile matchups eventually find you no matter what. Such has been the case for Usman, who improved upon his résumé with victories over the likes of Demian Maia, Rafael dos Anjos, Tyron Woodley, Colby Covington, Gilbert Burns and Jorge Masvidal during the second half of his tear.

As the name value of Usman’s opponents improved, so did the entertainment value of his fights. As it stands, the “The Nigerian Nightmare” has finished three of his four title defenses by knockout or technical knockout, including his rematch with Masvidal at UFC 261 this past Saturday.

Usman now possesses the second-longest winning streak in UFC history, behind only Anderson Silva, and he could be looking at a three-defense campaign in 2021 if everything breaks right. On the basis of his dominance and activity, Usman ascends from No. 4 to No. 2 in our latest pound-for-pound rankings, moving past the still-retired Henry Cejudo and the sidelined Jon Jones. Note: If Jones ever comes to terms with the UFC for a heavyweight bout with Francis Ngannou and claims that throne, it’s a virtual certainty he’ll reclaim the top spot he once held.

The competition is catching up to Jones, but it hasn’t surpassed him just yet. “Bones” survived by the skin of his teeth at UFC 247, as he edged Dominick Reyes in a unanimous verdict in the evening’s headliner at the Toyota Center in Houston. In a fight that many observers scored in favor of Reyes, Jones was able to sway the judges’ scorecards with consistent forward pressure and a strong push in the championship rounds. The hard-fought triumph gives Jones 14 victories in championship fights, the most in the history of the Las Vegas-based promotion. After some public back-and-forth with the UFC and Dana White, Jones vacated his light heavyweight strap in August, signaling a new era for the division. A move to heavyweight looms, though negotiations for that transition remain tense.

Cejudo became only the second fighter in promotion history to successfully defend titles in two divisions at UFC 249 when he defeated Dominick Cruz via second-round technical knockout in the evening’s co-main event at VyStar Veterans’ Memorial Arena in Jacksonville, Florida. After the victory, the Olympic gold medalist made a surprising retirement announcement, citing a desire to start a family. Retirements often don’t last in MMA, but if it holds up, “Triple C” ends his career with a six-fight winning streak that includes triumphs over Demetrious Johnson, T.J. Dillashaw, Marlon Moraes and Cruz.

Volkanovski improved to 2-0 against Max Holloway at UFC 251, but victory in the rematch came by a much slimmer margin than it did in their first meeting. After Holloway rocked the Australian featherweight champion at the end of Rounds 1 and 2 to take an early lead on the scorecards, Volkanovski finished strong over the bout’s final 15 minutes to earn a contentious split-decision triumph in Abu Dhabi. That makes nine consecutive UFC victories and 19 straight professional triumphs overall for the City Kickboxing representative. A showdown with Brian Ortega that was originally set for UFC 260 has been postponed after Volkanovski tested positive for COVID-19. That bout figures to be delayed even further, as Volkanovski and Ortega have been tabbed as coaches on “The Ultimate Fighter 29.”

Adesanya’s presumed coronation as two-division champion hit a speed bump at UFC 259, as he couldn’t deal with the size and skill of Jan Blachowicz in a unanimous decision loss. In addition to losing out on 205-pound gold, “The Last Stylebender” also sees a potential superfight with Jon Jones go up in flames. All is not lost for Adesanya, however. He is still unbeaten at middleweight and should have plenty of motivation to return to his own division to continue his title reign there. A rematch with Marvin Vettori has been targeted for the UFC 263 headliner.

After using the entire five rounds to defeat Emmanuel Sanchez in their first meeting in November 2018, Freire blasted the Roufusport product with a left hook and choked him out 3:35 into the opening round of their clash in the Bellator 255 headliner on April 2 at Mohegan Sun Arena in Uncasville, Conn. That makes seven consecutive wins for the Bellator’s reigning 145- and 155-pound champion, who advances to the finals of the promotion’s featherweight grand prix for an enticing matchup against the undefeated A.J. McKee.