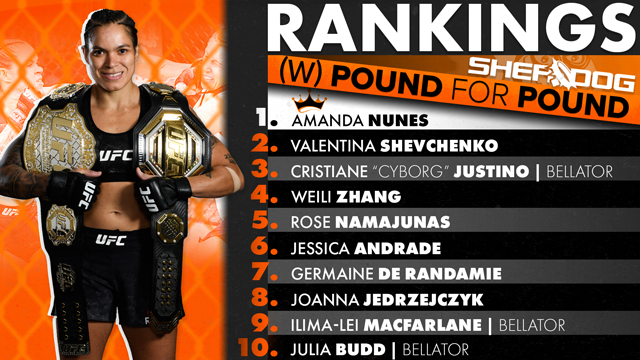 “Bullet” lost a round against Jennifer Maia at UFC 255 but was otherwise in complete control as she cruised to a clear-cut unanimous decision triumph in Saturday’s co-main event at the UFC Apex in Las Vegas. That makes five victories in title bouts and nine UFC triumphs overall for Shevchenko, who ranks among the sport’s best in both categories — and is entrenched at No. 2 in Sherdog.com's pound-for-pound rankings. The 32-year-old Kyrgyzstan native remains focused on cleaning out her division, and potential matchups against Jessica Andrade and Lauren Murphy could be next for the reigning 125-pound queen.

Nunes was completely dominant against Felicia Spencer in the UFC 250 headliner, winning a lopsided unanimous verdict that wasn’t as close as the judges’ scorecards (50-44, 50-44, 50-45) indicated. That makes 11 consecutive triumphs for Nunes, who joins Daniel Cormier and Henry Cejudo as the only three fighters to successfully defend UFC titles in two different weight classes. “Lioness” was supposed to return for another 145-pound title defense against Megan Anderson at UFC 256 on Dec. 12 but was forced to withdraw from the bout due to undisclosed reasons.

Macfarlane was rarely threatened in her latest title defense, as she cruised to a unanimous decision over Kate Jackson in the Bellator 236 headliner at Neal S. Blaisdell Arena in Honolulu. Macfarlane was on the verge of a finish in the fourth and fifth rounds, but Jackson relied on her tenacity to survive until the final bell. Macfarlane now has four successful championship defenses to her credit since winning the inaugural 125-pound belt in November 2017. Macfarlane go for defense No. 5 against Juliana Velasquez at Bellator 254 on Dec. 10.