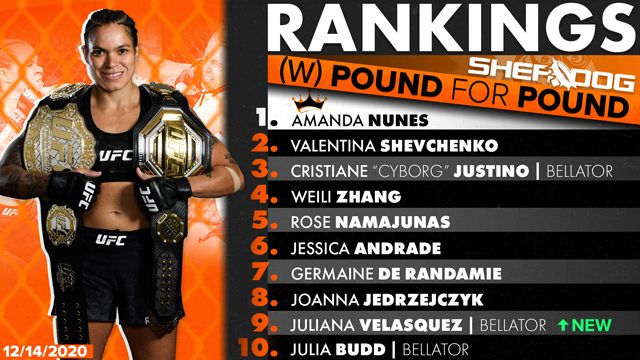 
Juliana Velasquez dispatched one of Bellator MMA’s biggest stars, and as a result the Brazilian judoka will make her debut in Sherdog.com's pound-for-pound Top 10.

Velasquez claimed the flyweight throne with a five-round verdict over the previously unbeaten Ilima-Lei Macfarlane in the Bellator 254 headliner, thus ending the reign of the only 125-pound champion the promotion has ever known. Velasquez joins the rankings at No. 9, while Macfarlane falls to 11th in defeat. Given Macfarlane’s popularity and the reasonably close nature of the defeat, a rematch could be in store down the road, though matchups with the likes of Liz Carmouche and Vanessa Porto also loom for Velasquez.

Elsewhere, Tatiana Suarez and Nina Ansaroff exit the rankings after meeting the 18-month inactivity deadline, clearing the way for Xiaonan Yan to make her P4P debut at No. 15.

Nunes was completely dominant against Felicia Spencer in the UFC 250 headliner, winning a lopsided unanimous verdict that wasn’t as close as the judges’ scorecards (50-44, 50-44, 50-45) indicated. That makes 11 consecutive triumphs for Nunes, who joins Daniel Cormier and Henry Cejudo as the only three fighters to successfully defend UFC titles in two different weight classes. “Lioness” was supposed to return for another 145-pound title defense against Megan Anderson at UFC 256 on Dec. 12 but was forced to withdraw from the bout due to undisclosed reasons.