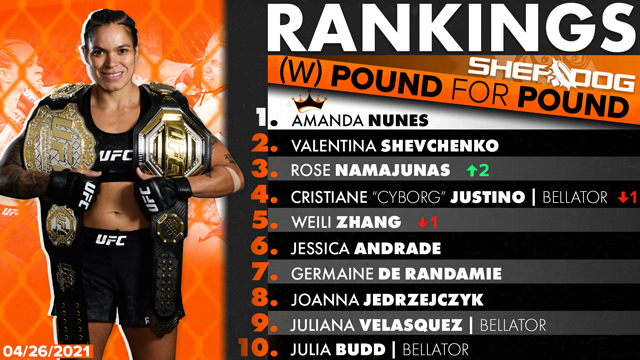 At UFC 261, “Thug” Rose became the first woman in promotion history to regain a title she previously lost, as she knocked out Weili Zhang with a head kick and follow-up punches in the opening round of their co-headlining bout at Vystar Veterans Memorial Arena in Jacksonville, Florida, on Saturday night.

That gives Namajunas four victories over fighters ranked in the pound-for-pound Top 10 since 2017, and it once again proves she’s moved past a potentially traumatizing slam KO loss to Jessica Andrade in 2019. A dominant finish over the previously fourth-ranked Zhang – the owner of a 21-bout professional winning streak – should come with some rewards.

That said, Namajunas jumps from fifth to third in our latest poll. It’s a move that might not be popular with Cristiane Justino loyalists, but the Elevation Fight Team product has a sturdy strength of schedule to her credit, and it only figures to surpass Cyborg’s in the coming months as the Brazilian attempts to work her way through the slim pickings of Bellator’s featherweight division.

Nunes extended her winning streak to 12 at UFC 259, where she ran roughshod over Megan Anderson en route to a reverse triangle armbar submission at the 2:03 mark of Round 1. The consensus women’s GOAT now has three wins in 145-pound title bouts to her credit, but there doesn’t appear to be any worthwhile challenges in that division at the moment. With retirement no longer on her mind after the birth of her daughter, “Lioness” returns to 135 pounds to defend her bantamweight crown against Julianna Pena at UFC 265 on Aug. 7.

Jessica Andrade was supposed to provide Shevchenko with her most difficult test since winning the vacant flyweight crown against Joanna Jedrzejczyk in December 2018. Instead, “Bullet” rolled past the Brazilian, landing seven takedowns and finishing the fight in Round 2 with elbows from the mounted crucifix position. That makes five successful title defenses and seven consecutive victories overall for Shevchenko, who will potentially look to the winner of the Joanne Calderwood-Lauren Murphy fight at UFC 263 for her next opponent.

Namajunas authored perhaps the most shocking finish of anyone at UFC 261, when she floored Weili Zhang with a head kick and sealed her victory with follow-up hammerfists 1:18 into the opening round of their co-main event encounter. “Thug” Rose can now call herself a two-time UFC strawweight champion, making her the first woman in any weight class within the Las Vegas-based promotion to reclaim a title she had previously lost. Namajunas has run the gantlet in recent years, posting wins over pound-for-pound stalwarts like Zhang, Jessica Andrade and Joanna Jedrzejczyk (twice) since 2017.

Justino’s first featherweight title defense in Bellator was a breeze, as she dominated Arlene Blencowe en route to a rear-naked choke victory in the second round of the Bellator 249 headliner — the first submission triumph of the powerful Brazilian’s MMA career. “Cyborg” has won three straight contests since her upset loss to Amanda Nunes at UFC 232 and appears poised for a dominant reign as 145-pound champ in the California-based promotion. Justino will return to defend her crown in a rematch against Leslie Smith at Bellator 259.

More than a year removed from her all-time classic battle with Joanna Jedrzejczyk at UFC 248, Zhang saw a 21-bout professional winning streak come to an end at the hands – or more accurately, the foot – of Rose Namajunas at UFC 261. While Zhang seemed poised for stardom prior to her head-kick knockout loss to Namajunas on April 24, the 31-year-old Chinese star shouldn’t be too far removed from contention thanks to a record that included victories in her first five Octagon appearances.

Andrade had no answers for Valentina Shevchenko at UFC 261, as she was taken down repeatedly and finished with elbows from the mounted crucifix position in the second round of their flyweight title bout on April 24. The former strawweight champion’s next move should be interesting. She has lost three of her last four UFC appearances, including setbacks to newly-crowned strawweight queen Rose Namajunas and ex-champ Weili Zhang. However, her 1-1 record vs. Namajunas could set the stage for a trilogy bout down the road.

In a championship matchup of undefeated fighters, Velasquez ended Ilima-Lei Macfarlane’s flyweight reign with a clear-cut five-round verdict in the Bellator 254 headliner on Dec. 10. The Brazilian judoka has been victorious in her first six promotional appearances and looks destined for a future showdown with Macfarlane training partner and former UFC title challenger Liz Carmouche. A rematch with Macfarlane is also possible.