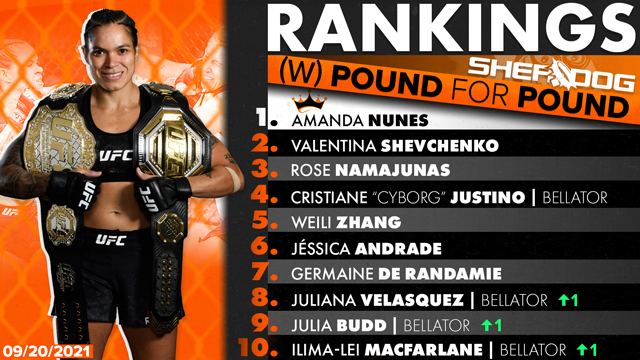 
Nearly nine years after their initial meeting, Ayaka Hamasaki once again got the better of Emi Fujino.

In a non-title bout on the Rizin 30 undercard, Hamasaki outpointed her rival at the Saitama Super Arena in Saitama, Japan, on Sunday night. The Japanese organization’s reigning atomweight queen has won four straight since falling to Seo Hee Ham at Rizin 20 on New Year’s Eve 2019, and with Ham now competing at 115 pounds in One Championship, is the sport’s clear-cut No. 1 at 105 pounds. That success also allows her to maintain her No. 12 ranking in Sherdog.com's latest female pound-for-pound poll.

Meanwhile, Joanna Jedrzejczyk, previously No. 8, is removed from the pound-for-pound rankings due to more than 18 months of inactivity. The former strawweight champ hasn’t competed since her classic loss to Weili Zhang at UFC 248 and currently doesn’t have a fight on the horizon. As a result, Liz Carmouche, who could be on the verge of a flyweight title shot in Bellator MMA, joins the bubble list at No. 15.

Nunes extended her winning streak to 12 at UFC 259, where she ran roughshod over Megan Anderson en route to a reverse triangle armbar submission at the 2:03 mark of Round 1. The consensus women’s GOAT now has three wins in 145-pound title bouts to her credit, but there doesn’t appear to be any worthwhile challenges in that division at the moment. “Lioness” was supposed to return to 135 pounds to defend her bantamweight crown against Julianna Pena at UFC 265 but was forced to withdraw after testing positive for COVID-19. The bout has been rescheduled for UFC 269.

Jessica Andrade was supposed to provide Shevchenko with her most difficult test since winning the vacant flyweight crown against Joanna Jedrzejczyk in December 2018. Instead, “Bullet” rolled past the Brazilian, landing seven takedowns and finishing the fight in Round 2 with elbows from the mounted crucifix position. That makes five successful title defenses and seven consecutive victories overall for Shevchenko, who will next face Lauren Murphy in the co-main event at 266 on Sept. 25.

Andrade had no answers for Valentina Shevchenko at UFC 261, as she was taken down repeatedly and finished with elbows from the mounted crucifix position in the second-round of their flyweight title bout on April 24. The former strawweight champion’s next move should be interesting. She has lost three of her last four UFC appearances, including setbacks to newly-crowned strawweight queen Rose Namajunas and ex-champ Weili Zhang. Next, Andrade will square off against Cynthia Calvillo in a flyweight bout at UFC 266.