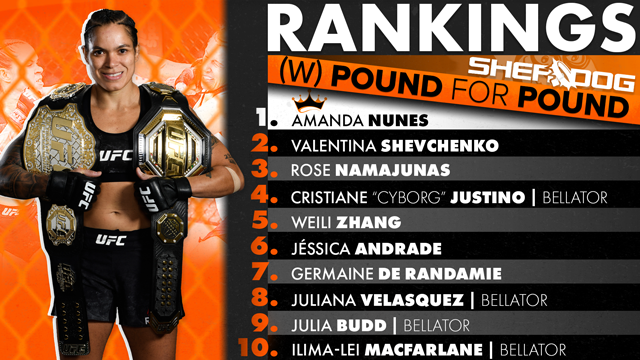 
Chalk reigned supreme when it came to the women’s pound-for-pound rankings at UFC 266.

As expected, Valentina Shevchenko cruised past Lauren Murphy, winning via fourth-round technical knockout in Saturday’s co-main event at the T-Mobile Arena in Las Vegas. “Bullet” remains a clear-cut No. 2 in Sherdog’s pound-for-pound poll, stuck behind a woman who owns two victories against her in UFC competition.

If there was any question about the impressive nature of Shevchenko’s flyweight reign, one need look no further than the UFC 266 main card, where Jessica Andrade dispatched Cynthia Calvillo in the opening stanza in another matchup of 125-pound contenders. Andrade, who maintains her sixth spot in the pound-for-pound rankings, had little to offer Shevchenko in a second-round TKO loss at UFC 261 earlier this year. If Shevchenko continues to dominate the competition as she has, perhaps the UFC will eventually have no choice but to book her in a trilogy against reigning pound-for-pound queen Amanda Nunes.

Nunes extended her winning streak to 12 at UFC 259, where she ran roughshod over Megan Anderson en route to a reverse triangle armbar submission at the 2:03 mark of Round 1. The consensus women’s GOAT now has three wins in 145-pound title bouts to her credit, but there doesn’t appear to be any worthwhile challenges in that division at the moment. “Lioness” was supposed to return to 135 pounds to defend her bantamweight crown against Julianna Pena at UFC 265 but was forced to withdraw after testing positive for COVID-19. The bout has been rescheduled for UFC 269.

Andrade was in peak form at UFC 266, as she walked Cynthia Calvillo down and landed power punches until her opponent was unable to defend against the Brazilian’s onslaught at the 4:54 mark of Round 1 at the T-Mobile Arena in Las Vegas on Sept. 25. The former strawweight champion bounces back from a TKO loss to reigning 125-pound champ Valentina Shevchnenko at UFC 261 while winning for the second time in three Octagon appearances since moving up to flyweight. Andrade currently ranks second in UFC women’s history in wins (13) and finishes (seven).