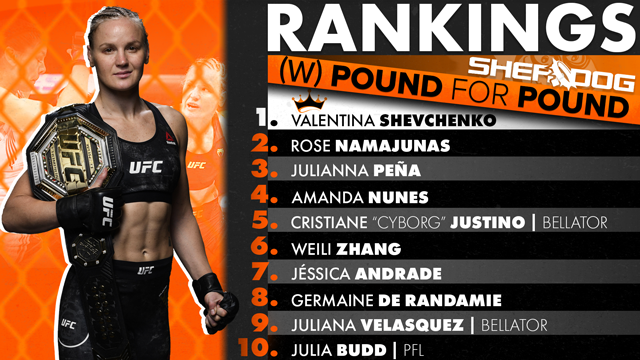 
When it comes to the female pound-for-pound rankings, Ayaka Hamasaki’s loss is Liz Carmouche’s gain.

Hamasaki’s upset loss to Seika Izawa at Rizin 33 on New Year’s Eve results in the Japanese veteran’s exit from Sherdog’s pound-for-pound poll. If there’s a bright spot for Hamasaki, it’s the fact that the defeat came in a non-title bout, meaning she might get to avenge the defeat to Izawa at some point in 2022, this time with a belt on the line.

However, the setback does result in some changes in the women’s pound-for-pound standings. Entering the rankings at No. 15 is Carmouche, a former UFC title challenger who is currently on a three-bout winning streak in Bellator MMA and one of the promotion’s top contenders at 125 pounds. “Girl-Rilla” doesn’t currently have a fight booked, but she is near the top of the list of potential challengers for current 125-pound queen Juliana Velasquez.

Pena entered UFC 269 as a massive underdog, and she exited the event with the biggest upset of 2021 along with the bantamweight title in tow. A tenacious Pena survived a slugfest with Amanda Nunes and when her Brazilian foe fatigued, “The Venezuelan Vixen” capitalized with a takedown and rear-naked choke submission. Pena, who is victorious in seven of nine Octagon appearances, could be in line to face Nunes in an immediate rematch — but the 135-pound division appears to be more wide open that it has been in years.

Nunes was a victim of 2021’s biggest upset at UFC 269, as she suffered a second-round submission loss to Julianna Pena in the evening’s co-main event at the T-Mobile Arena in Las Vegas. Nunes emptied her gas tank in a firefight against “The Venezuelan Vixen” in Round 2, and once she was unable to get the knockout, she succumbed to a rear-naked choke to relinquish the bantamweight belt. Considering she entered the bout with the unofficial title of women’s GOAT, an immediate rematch with Pena is a realistic possibility unless Nunes elects to defend her 145-pound title next.