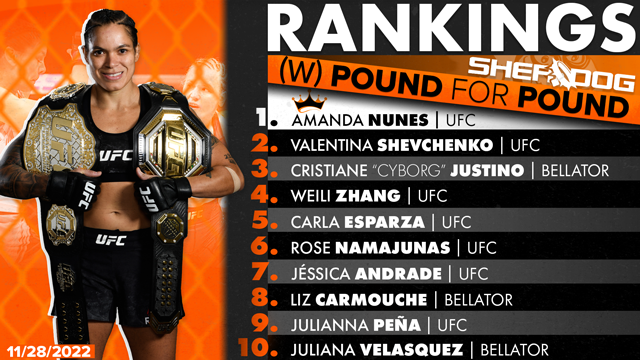 
The third time was indeed the charm for Larissa Pacheco.

After losing all eight rounds to Kayla Harrison in their two previous meetings, Pacheco defied the odds to capture a five-round verdict against the two-time Olympic gold medalist in their lightweight final at the 2022 PFL Championships on Friday night. After running roughshod over her first 15 opponents, Harrison was left to sample the bitter taste of defeat for the first time in her professional MMA career.


Advertisement
Pacheco has improved measurably since back-to-back losses to Germaine de Randamie and Jessica Andrade resulted in her release from the UFC as a 20-year-old fighter in 2015. The now 28-year-old Brazilian has carved out a six-fight winning streak in PFL competition, with five of those victories coming inside the distance. Of course, there was no triumph bigger than the one against her nemesis in New York. Thanks to that victory, Pacheco enters the female pound-for-pound rankings at No. 15, dismissing Harrison from the poll in the process.

The future should be quite interesting for Pacheco, who may struggle to return to featherweight if the PFL discards the 155-pound division for the 2023 campaign, a decision that seems likely with Harrison leaving the season format in favor of one-off bouts. While a fourth bout with Harrison could be in the cards, Pacheco deserves to savor the moment for a little bit. She’s earned it.

It took a little bit longer than their first meeting, but “Cyborg” nonetheless improved to 2-0 against Arlene Blencowe with a unanimous decision triumph in the Bellator 279 main event at Neil S. Blaisdell Arena in Honolulu, Hawaii, on April 23. The reigning featherweight queen has won six straight since her shocking loss to Amanda Nunes in December 2018 and still looks to be head and shoulders above the 145-pound field in Bellator. A potential cross-promotion with the PFL for a superfight with Kayla Harrison would be quite intriguing, though it lost some luster when Harrison fell to Larissa Pacheco in the PFL lightweight final on Nov. 25. In the meantime, “Cyborg” enjoyed a successful professional boxing debut in September.

After a three-bout stint at 125 pounds that saw her fail in a bid to capture championship gold against Valentina Shevchenko, Andrade made an impressive return to strawweight with a first-round submission of surging contender Amanda Lemos in the UFC Fight Night 205 main event on April 23. Not only did Andrade reassert herself as a person of interest in the division, but she also authored the first standing arm-triangle choke submission in the history of the Las Vegas-based promotion. Andrade will return against Lauren Murphy in a flyweight clash at UFC 283.

When it comes to making good on championship opportunities, the third time was the charm for Carmouche, who came up short in title bouts against Ronda Rousey and Valentina Shevchenko before claiming flyweight gold with a stoppage of Juliana Velasquez in the Bellator 278 main event. The Team Hurricane Awesome product survived an early knockdown before taking Velasquez down and advancing to a mounted crucifix, where she hammered away with elbows to secure a technical knockout victory in the fourth round. Carmouche was likely behind on the scorecards before the controversial finish, but she’ll get a chance to prove her victory was no fluke in a rematch with Velasquez at Bellator 289.

Velasquez appeared to be on the right track to victory through three rounds against Liz Carmouche in the Bellator 278 headliner, but that all changed when “Girl-Rilla” secured a mounted crucifix and rained down elbows to force a stoppage with 13 seconds remaining in the period. While Velasquez didn’t appear to be in danger from the strikes, her unblemished record is no longer. The Brazilian will have a chance for redemption when she meets Carmouche in a championship rematch at Bellator 289.